The company has made a lot of big moves recently with its massive reorganization a week ago that took steps to better unify the company and get it back on track.

Now with today’s earnings we can see why Microsoft so dramatically put these moves into place. Microsoft posted disappointing earnings with revenue of 52 cents per share on revenue of $19.90 billion. The highlight of the report appears to be a reported profit of $4.97 billion.

These results missed analyst expectations. Analysts surveyed by FactSet expected to see earnings of 75 cents a share on revenue of $20.72 billion.

One of the most interesting points in today’s earnings is that Microsoft is taking a $900 million charge for their Surface RT tablets. Microsoft describes this as “inventory adjustments.” Notably, Surface RT tablets saw a steep $150 price drop recently.

On top of the $900 million charge, Microsoft noted that its earnings were impacted by “$540 million of previously deferred revenue related to the Windows Upgrade Offer, and a $733 million expense related to the European Commission fine.” Those both were previously addressed but they still hurt when you add all of these write-downs together.

During the past several quarterly earnings, Microsoft’s revenue has fluctuated wildly. But today’s earnings fall into relatively normal levels versus the past few years’ worth of earnings. (See chart below.) 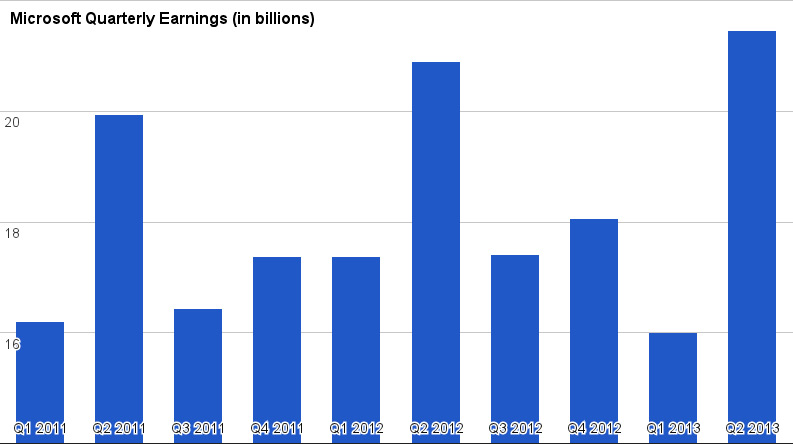 Here’s how Microsoft broke down its performance by business unit. (This will be the last time Microsoft reports using these business units now that it has unified the company into a new organization design.)

The big winner among these units is the Business Division, which is up 14 percent year over year. Office 365 sales appear to be robust with more than 1 million users on 365 Home Premium, and now 365 is on track to earn Microsoft $1.5 billion in annual revenue.

Check out Microsoft’s stock price at close today versus some of its biggest competitors in the chart below.