Microsoft is rolling out a handful of updates to the Outlook for iOS app, a move that comes a week after the company revealed it was redesigning the icons across the entire Office suite of apps.

Outlook for mobile will be among the first apps to get the new icon, starting with the iPhone and iPad incarnation, which is rolling out globally from today. But the new icon is really just representative of the broader design overhaul that’s going on under the hood.

Indeed, the app itself has been given a notable aesthetic reboot, with bolder lettering and colors designed to make the app stand out when you’re switching between other apps on your device. 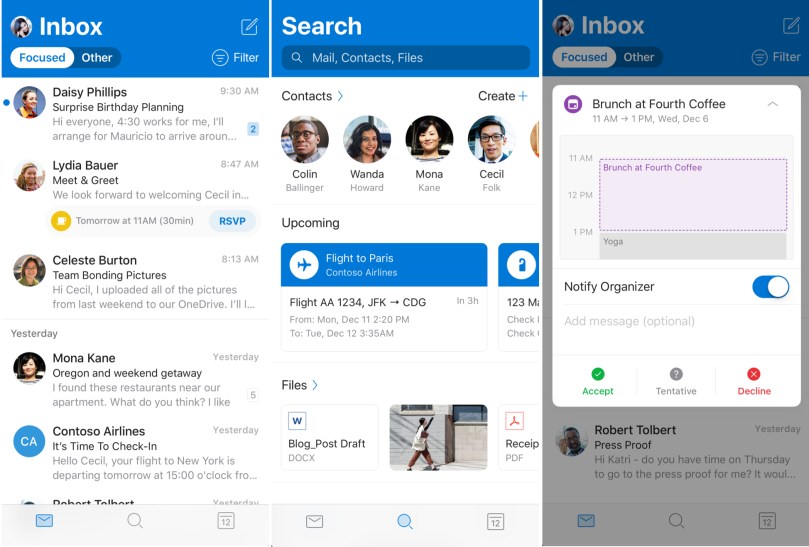 Above: New Outlook for iOS

“We recognize that people are using many apps on their devices and it’s common to quickly switch between apps to complete tasks,” Microsoft said in a blog post. “A strong app header with bold color and typography helps you easily find your way to Outlook while rapidly switching between a sea of monochromatic apps to quickly complete your task and get back to what matters.”

More subtle changes won’t be apparent until you start using the app. For example, the header dynamically reduces in size as you scroll so that you have more screen real estate for actual messages. The assumption here is that if your finger is on the scroll bar, you already know which part of the app you are in and don’t need to see the full header.

Outlook for iOS will also now feature what Microsoft refers to as “sensory feedback” that will pair haptic feedback, or small vibrations, with on-screen actions such as when you swipe left or right on one of your emails. This is married with small layout and design changes when you carry out such an action. For example, the message will change shape or color as you’re swiping, while the corners of the message will be rounded rather than square.

Above: The new swipe

Elsewhere in the app, you’ll notice a number of other UI enhancements, including a new animated calendar icon that “fans” forward and backward as you move through your weekly or monthly agenda.

Microsoft launched Outlook for Android and iOS nearly four years ago, shortly after snapping up email startup Acompli for $200 million. The apps have been given a number of updates over the years, including new enterprise-focused features and deep integrations with other Microsoft Office applications.

The latest update builds on this evolution and strives to ensure Outlook isn’t left behind as Google continuously iterates and upgrades its popular Gmail app.

The refreshed Outlook for iOS won’t be available for everyone immediately — it will hit a small percentage of users from today and will gradually be expanded to more users in the coming weeks.