Microsoft released a new Windows 10 Mobile preview today, although the company still isn’t ready to share when the operating system will be available for older devices. The latest build includes improvements to the Phone app, Outlook, and Calendar.

Like the last mobile build, this one is only available for devices that shipped with Windows 10 Mobile (the Lumia 950, 950 XL, 650, 550, Xiaomi Mi4, and Alcatel OneTouch Fierce XL). Officially, Microsoft plans to roll out Windows 10 Mobile to existing Windows Phone users in Q1 2016 — the internal target has shifted multiple times, with the latest target being March.

First up, the Phone app’s tabs have gained missed call and voicemail waiting indicators. If you open a tab with a missed call or voicemail, the indicator disappears, but this will change with an upcoming build.

Outlook Mail now lets you turn off the message preview text in the message list (Settings => Reading => Conversation => turn off “Show preview text”). There’s also a new way to get rid of junk email in your inbox: Press down on a message and choose Move to Junk. In Outlook Calendar, you can now let others know “I’ll be late” directly from meeting notifications. 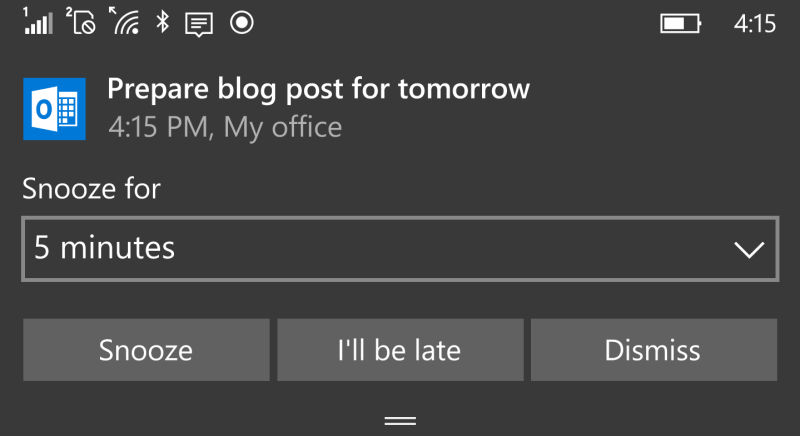 Today’s update bumps the Windows 10 build number from 14267, made available to testers on February 19, to build 14283. It’s not clear if Microsoft will push this build to older Windows Phone devices, but it may push out a few more preview builds first before it starts that process.