Analysts had expected Microsoft to earn $22.09 billion in revenue and earnings per share of $0.64. The company’s stock was up 0.34 percent in regular trading, but down some 4 percent in after-hours trading (expected, given the expectations). Microsoft said it returned $6.4 billion to shareholders in the form of share repurchases and dividends during the quarter.

“Organizations using digital technology to transform and drive new growth increasingly choose Microsoft as a partner,” Microsoft CEO Satya Nadella said in a statement. “As these organizations turn to us, we’re seeing momentum across Microsoft’s cloud services and with Windows 10.”

This segment, which includes results from Office and Office 365 (commercial and consumer customers), grew 1 percent to $6.5 billion. 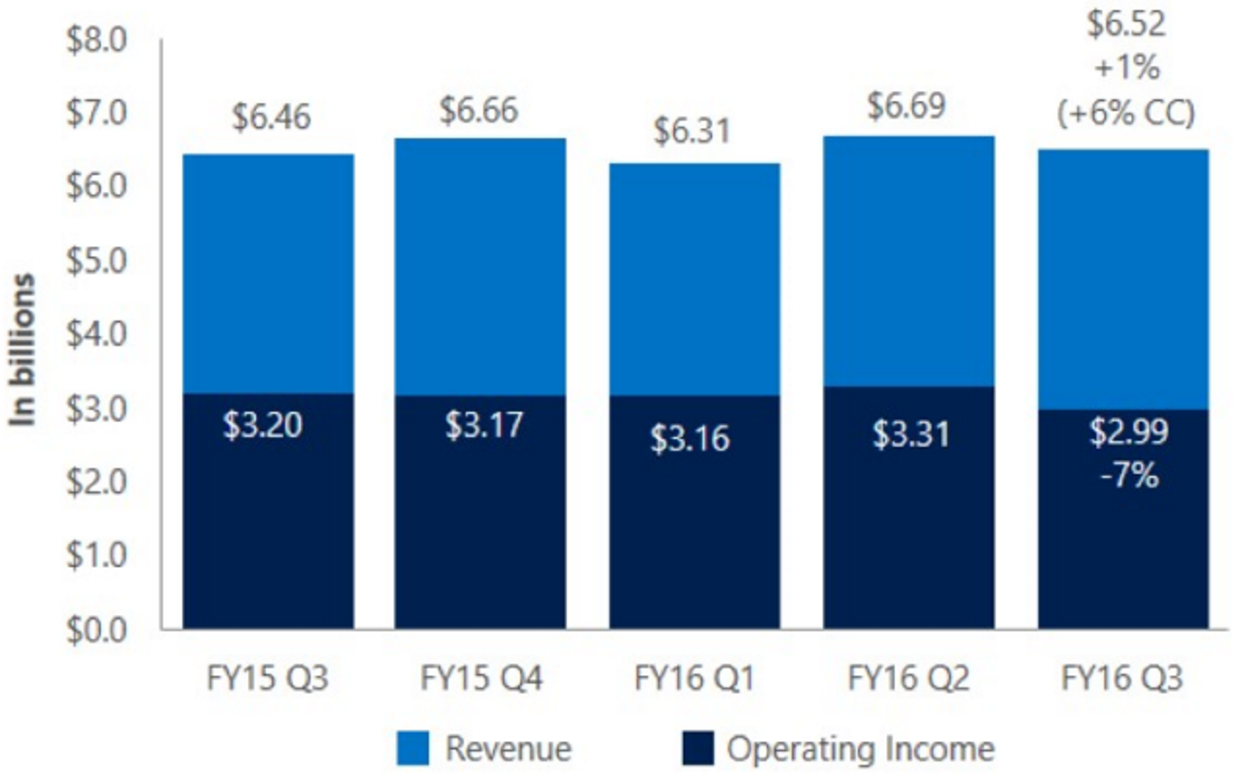 Steady Office 365 growth is not much of a surprise, but it does appear to be slowing. The company’s attempt to convert its traditionally most lucrative software business into a subscription revenue stream may be plateauing.

This segment, which includes results from server products and services (including Windows Server and Azure), grew 3 percent to $6.1 billion. Server products and cloud services revenue grew 5 percent. But the big highlight was Azure revenue, which grew 120 percent, and usage of Azure compute and Azure SQL database, which more than doubled year over year.

Microsoft this quarter also shared that its commercial cloud business exceeded a $10.0 billion annual run rate. The company previously projected that it expects this number to hit $20 billion by 2018.

This segment, which includes results for Windows licensing and devices (Surface, phones, and Xbox), decreased 1 percent to $9.5 billion. Windows OEM revenue declined 2 percent. Microsoft once again tried to highlight the silver lining by saying this decline was OK because it counts as “outperforming the PC market.”

Microsoft saw Surface revenue jump from $713 million in Q3 2015 to $1.11 billion in Q3 2016. The Surface Pro 4 and the Surface Book seem to be selling well. And yet we still don’t know how many Microsoft is pushing out, as the number includes accessories and older Surface devices.

Phone revenue declined 46 percent. As seems to be the story every quarter, the numbers are even worse on a per-unit basis: In Q3 2016, Microsoft sold 2.3 million Lumia devices, down from 8.6 million in Q3 2015. That’s a 73 percent drop. The company naturally didn’t elaborate too much — none of this is shocking given the employee cuts and Nadella’s plan to focus on fewer devices.

Xbox Live monthly active users grew 26 percent year over year. The service now has 46 million players, which is actually down from the record 48 million last quarter.

All in all, a mixed quarter for Microsoft. While the company’s Windows and phone businesses continue to slide, its cloud and services divisions are managing to keep it steady.