Microsoft today reported earnings for its fourth fiscal quarter of 2016, including revenue of $22.6 billion and earnings per share of $0.69. In Q4 2015, Microsoft saw $22.2 billion in revenue and a loss of $0.40 per share due to the $7.6 billion writedown related to its acquisition of the Nokia Devices and Services business.

Analysts had expected Microsoft to earn $22.14 billion in revenue and earnings per share of $0.58. In short, the company beat expectations. The company’s stock was down 1.61 percent in regular trading, but up some 3 percent in after-hours trading (expected, given the results). Microsoft said it returned $6.4 billion to shareholders in the form of share repurchases and dividends during the quarter.

“This past year was pivotal in both our own transformation and in partnering with our customers who are navigating their own digital transformations,” Microsoft CEO Satya Nadella said in a statement. “The Microsoft Cloud is seeing significant customer momentum and we’re well positioned to reach new opportunities in the year ahead.”

This segment, which includes results from Office and Office 365 (commercial and consumer customers), grew 5 percent to $7.0 billion. 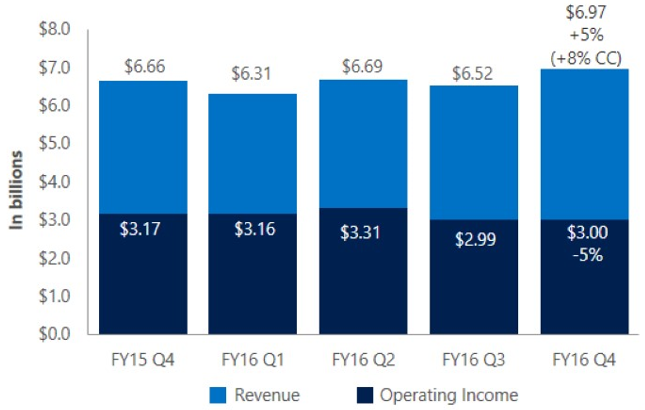 Steady Office 365 growth is not much of a surprise, but we can now definitely see it has been slowing over the last few quarters. The company has converted its traditionally most lucrative software business into a subscription revenue stream, and we’re now entering the plateau.

This segment, which includes results from server products and services (including Windows Server and Azure), grew 7 percent to $6.7 billion. 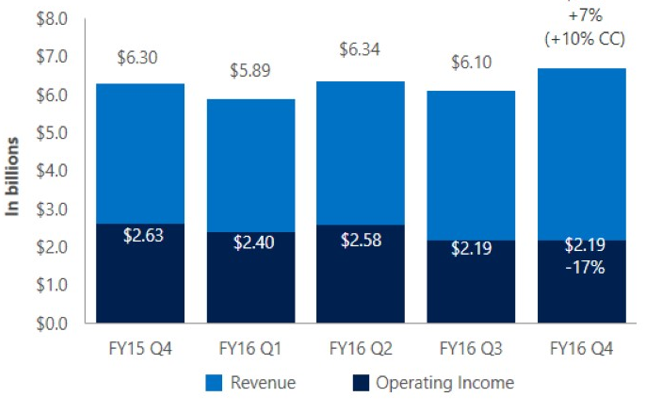 Server products and cloud services revenue grew 5 percent. But the big highlight as always was Azure revenue, which grew 102 percent, and usage of Azure compute, which more than doubled year over year.

This segment, which includes results for Windows licensing and devices (Surface, phones, and Xbox), declined 4 percent to $8.9 billion. 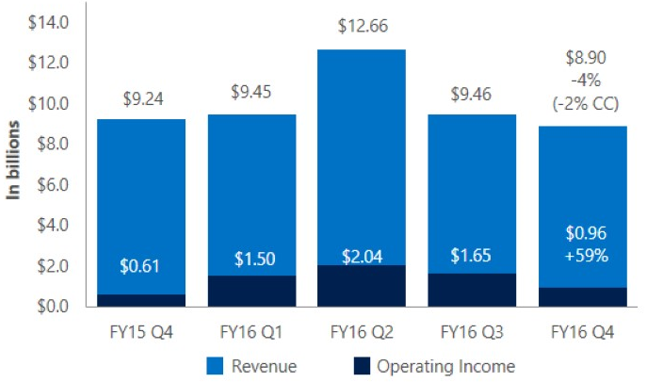 Phone revenue declined 71 percent. Microsoft didn’t talk units, but it did say the decline was $870 million and that it hurt overall devices revenue, which decreased by 35 percent (down $782 million). None of this is shocking given the employee cuts and Nadella’s plan to focus on fewer devices.

All in all, a strong quarter for Microsoft. But the trouble spots still remain: The company will be feeling the pain of its phone business long after the revenue losses are taken care of.