Analysts had expected Microsoft to earn $29.21 billion in revenue and earnings per share of $1.08. The company destroyed expectations. The company’s stock was down slightly in regular trading, but up 1 percent in after-hours trading. Microsoft said it returned $5.3 billion to shareholders in the form of share repurchases and dividends during the quarter.

“We had an incredible year, surpassing $100 billion in revenue as a result of our teams’ relentless focus on customer success and the trust customers are placing in Microsoft,” Microsoft CEO Satya Nadella said in a statement. “Our early investments in the intelligent cloud and intelligent edge are paying off, and we will continue to expand our reach in large and growing markets with differentiated innovation.”

$100 billion in revenue for the year is impressive. The consistent quarterly success can be attributed to Nadella’s plan to turn Microsoft into a cloud company. In October, Microsoft’s cloud annualized run rate passed $20 billion, ahead of schedule. 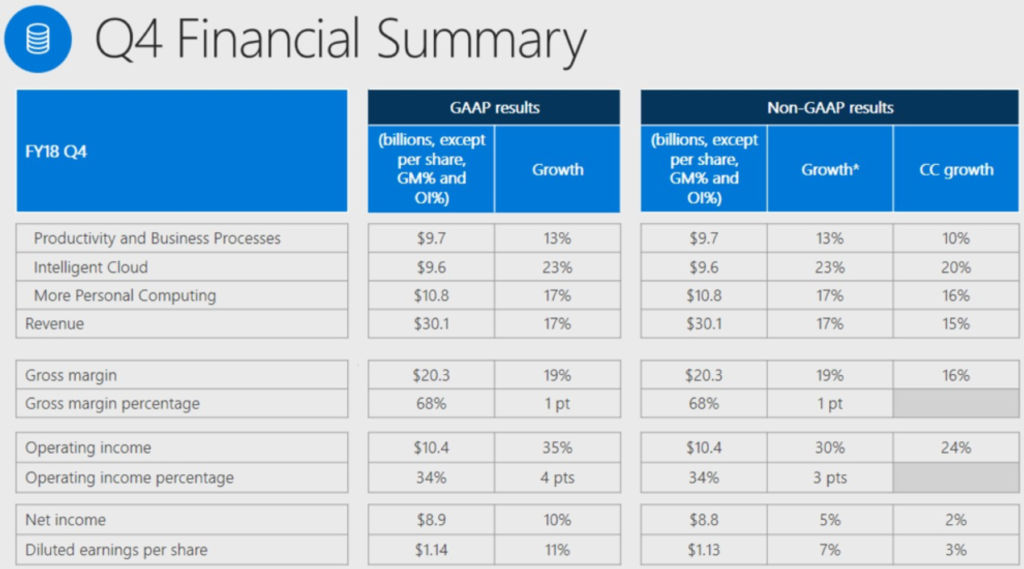 It looks like Microsoft is starting to monetize its LinkedIn acquisition well. It has been two years since Microsoft announced plans to acquire LinkedIn, although the acquisition only closed in December 2016. After Microsoft confirmed its intent to acquire GitHub, we’ll be watching to see if it can manage that investment as wisely.

The impressive growth of the Surface would appear to indicate that the Surface Book 2, the company’s most expensive laptop-tablet hybrid, is selling well. On the other end of the lineup is the newly announced Surface Go, but that little guy doesn’t start shipping until next month — it will be a few quarters until we can try to gauge its sales.