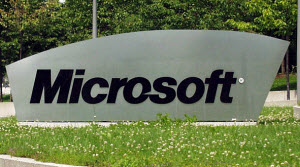 Microsoft reported revenues for its first fiscal quarter today were down 14 percent at $12.92 billion, but the company still beat Wall Street estimates.

Net income was $3.57 billion, or 40 cents a share. Analysts had expected 32 cents a share, and the stock is up today. Revenues from yesterday’s launch of the Windows 7 operating system will be recorded in the second fiscal quarter, which closes on Dec.31. While business demand was weak in the quarter, consumer demand was good. The overall PC business grew zero to 2 percent compared to a year ago, the company estimated.

Going forward, Microsoft predicted that its Windows sales would be in line with PC industry growth, which should be higher because of Windows 7. Emerging markets will grow at double digits, while Microsoft’s business division is expected to lag behind the PC market. The big variable is how soon businesses start buying computers again.

This quarter might have been hurt by both the recession and delays in purchases in anticipation of the Windows 7 launch. Windows revenues fell 37 percent to $2.6 billion, while Microsoft’s business division revenue was also down significantly from a year ago. The company predicts consumer spending will be strong as a result of the Windows 7 launch, while businesses are likely to start spending money next year as they upgrade to Windows 7.

“Into next year, we expect to see businesses start spending again,” said Chris Liddell, chief financial officer, on a conference call this morning. “We are reasonably cautious about the business cycle. We think it will begin next year and stretch over a couple of years. How quickly that will happen, we won’t speculate yet.”

One worry for Microsoft is that consumers have been opting for netbooks, the low-end web-surfing computers that are cheaper and smaller than laptops. Some are using cheaper versions of Windows, but many are using versions of the Linux operating system.

Servers and Tools division revenues were flat at $3.4 billion. The Entertainment and Devices group was also flat compared to last year, with revenue of $1.9 billion. Microsoft sold 2.1 million Xbox 360 game consoles in the quarter, bringing the total to 34 million consoles sold. Revenues for the full fiscal year are expected to be flat for the Entertainment and Devices division, which also includes Zune portable sales.

Xbox 360 hardware revenue was hurt in part because of a $100 price cut, but the company had a $100 million increase in game revenue, thanks to sales of Halo 3: ODST, which was the No. 1 game in September. Profits in the division were nearly double year over year at $312 million, helped by a 50 percent growth in Xbox Live revenues. Microsoft said it has sold 8.7 games for every console, the highest in the industry.

Microsoft’s online division lost money, with a loss of $480 million on revenue of just $490 million. The company is investing heavily in its Bing search engine, which launched in June and has gained market share steadily. Search ads from Bing were up slightly, but online ad revenues were down 3 percent.

Microsoft said it expects to spend about $26.2 billion in the full fiscal year ending June 30, 2010, down from its earlier estimate of $26.5 billion a year earlier. Liddell said the company is cautious about spending because of the uncertain nature of the economic rebound.

Microsoft ended the September quarter with $36.7 billion in cash and short term investments.