Microsoft is at it again — touting Edge as the most battery-efficient browser on Windows 10. The company has rerun its battery tests from the previous quarter using the latest versions of the major browsers, open-sourced its lab test on GitHub, and published the full methodology. But this time, Microsoft says it also replicated one of Google’s tests to show that Edge lasts longer than Chrome, Firefox, and Opera.

In June, Microsoft released test results that showed Edge uses less battery life than Chrome, Firefox, and Opera for the same tasks. Then the company revealed that even more improvements were on the way as part of the Windows 10 Anniversary Update.

Earlier this month, less than a week after Chrome 53 was released, Google revealed some of its own battery tests compared to Chrome 46. “However, they didn’t include other browsers in this test,” Microsoft pointed out, jumping on the opportunity to redo the test itself.

Microsoft looped the same video from Vimeo on Surface Books, just like Google, but with Edge, Chrome, Firefox, and Opera. The results: 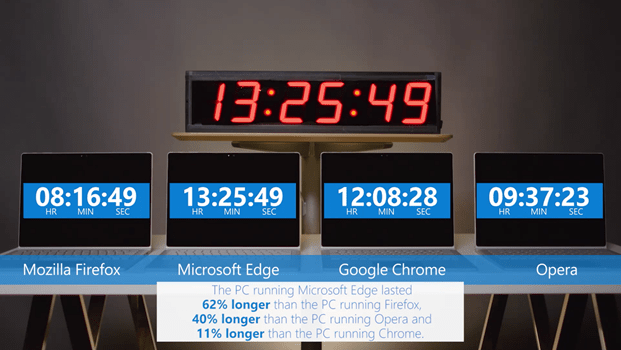 Here is Edge compared to Chrome, Firefox, and Opera in the Netflix streaming test: And here is the breakdown compared to a quarter ago:

Microsoft also broke down the results again in terms of browser efficiency: 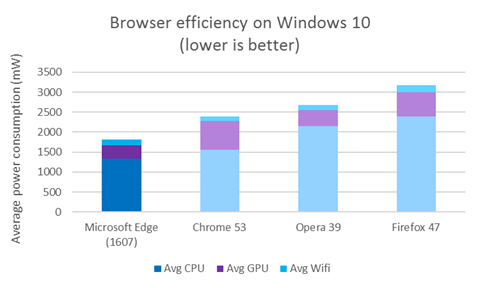 And so Microsoft once again concludes that Edge is the most efficient browser on Windows 10. It now offers between 24 percent and 43 percent more efficient power consumption (that range was 36 percent to 53 percent a quarter ago).

You can try reproducing these results yourself by grabbing the lab tests from GitHub and following the methodology.