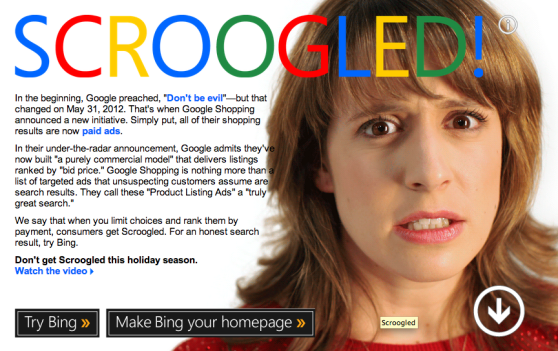 I’m no expert, but Microsoft’s anti-Google “Scroogled” ads might be some of one of the worst I’ve ever seen.

Not only does the campaign reek of the most feeble kind of desperation, but there’s some evidence to suggest that it’s even backfired on Microsoft.

Now parts of “Scroogled” are on their way out, according to Microsoft online services director Stefan Weitz, who told KQED that his company is winding down the print and TV arms of the campaign.

Weitz said that Microsoft started “Scroogled” with a poll from the Roper Center for Public Opinion Research, which found that there were a lot of people who had no idea that Google scans their emails to serve them ads.

While attack ads are never all that enjoyable, “Scroogled” is particularly bad because it somehow made me want to use services like Bing and Outlook less. Using fear-mongering and somewhat misleading claims just doesn’t work on those who can see through them — hence the backlash.

But the biggest problem with “Scroogled” is that it doesn’t say anything about Microsoft’s own products. If you want people to pay attention, tell them what your product does well, not what your competitor’s product does poorly. It’s hard to do something like “Scoogled” and look like the good guy — even if your claims are perfectly accurate.

In case you were fortunate enough to have missed the TV spots, take a deep breath, maybe a shot of whiskey or two, and watch the video below.