In Q1 2014, Microsoft reported $400 million in Surface revenue, meaning it is starting this new fiscal year well, having more than doubled the figure (up 127 percent, to be exact). The company ended the last year with $409 million in Surface quarterly revenue.

“Customers are embracing our latest technologies from Surface Pro 3 and Office 365 to Azure and SQL Server,” Microsoft chief operating officer Kevin Turner said in a statement. “Through great execution by our sales teams and our partners, we have been able to deliver our truly differentiated value to the marketplace.”

The growth of Xbox sales shouldn’t be too much of a surprise (its revenue also increased by 58 percent), given that the Xbox One launched in 28 new markets during the quarter. The company didn’t break out Xbox 360 and Xbox One numbers, likely because Sony’s PlayStation 4 is still winning the sales battle.

Last month, the PS4 once again outsold the Xbox One. That was the ninth consecutive month Microsoft had lost to Sony, according to market research firm NPD. 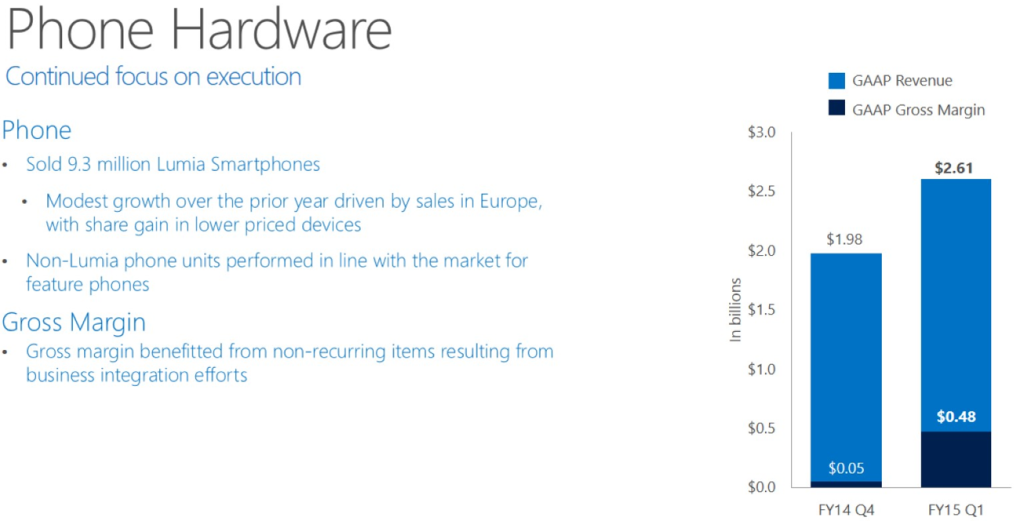 Speaking of fighting a tough battle, Microsoft also sold 9.3 million Lumia phones in Q1 2015. That is a 5.6 percent increase from the record 8.8 million handset sales it saw in the same quarter last year.

At its very core, Microsoft is a software company. Yet these hardware results are nothing to dismiss. CEO Satya Nadella is trying to transform Redmond into a mobile-first and cloud-first company. With such a bold goal, hardware is just as important as software.