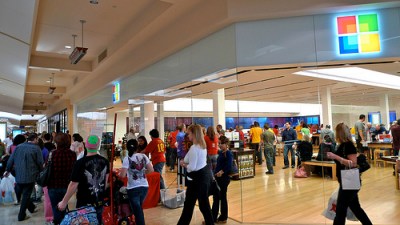 According to sources close to Microsoft, Chief Executive Steve Ballmer and Chief Operating Officer Kevin Turner are interested in matching or exceeding the number of Apple retail stores, which currently number over 300. Many attribute Apple’s success in recent years to the growth of its stores, which allow customers to interact with the company’s newest products.

Despite the push to follow Apple, Microsoft has only opened 8 stores since launching its retail initiative in late 2009, and has only announced two future stores.

Considering how expensive the stores are to build, and the fact that most of the existing ones are not profitable, it doesn’t appear to be the right decision to expand the number of retail stores. If Microsoft went ahead with CEO Balmer’s plan to match the number of Apple stores, it would certainly raise the eyebrows of investors.

This is particular true given the needed changes that could be made now at the existing stores, which currently only serve to remind consumers of how unhip Microsoft is.For example, Apple calls its technical gurus “Geniuses,” while Microsoft calls its equivalent employees “Retail Technical Advisors.” Microsoft has not paid attention to the uniformed brand image and attention to detail that have made Apple so popular.

Additionally, in contrast to Apple’s products, the products on sale at Microsoft stores are also available from hundreds of other outlets. Although customers may stop by the stores, there isn’t a large incentive to purchase products at one of the Microsoft stores when there are so many other options.

At this point, at least until the retail stores become profitable (unlikely for some time) or Windows Phone 7 devices begin selling well, it may be best if Microsoft holds back on Balmer’s retail ambitions.