Microsoft has never shared how many individuals are using Teams, its chat-based collaboration tool that’s part of Office 365 and competes with Google’s Hangouts Chat, Facebook’s Workplace, and Slack. It’s therefore impossible to make an apples-to-apples comparison, but at least we know it’s growing.

The company announced today that Teams is now used by 200,000 organizations in 181 markets and 39 languages. That’s up from 125,000 organizations as of September 2017 and 50,000 when it launched out of preview a year ago. Office 365 itself has 120 million business users — a huge number that Microsoft undoubtedly wants to get on Teams.

Here are the numbers we do know: Google only launched Hangouts Chat for all G Suite users less than two weeks ago, and it didn’t share how many organizations had used it in preview before then (4 million businesses pay for G Suite, as of February 2018). Facebook had 30,000 businesses using Workplace as of October 2017. Slack had 6 million daily active users, 2 million of whom are paying customers, as of September 2017.

Microsoft Teams thus appears to be bigger than Google’s and Facebook’s offerings, but it’s probably not yet close to Slack. If it was, Microsoft would surely share individual user numbers. 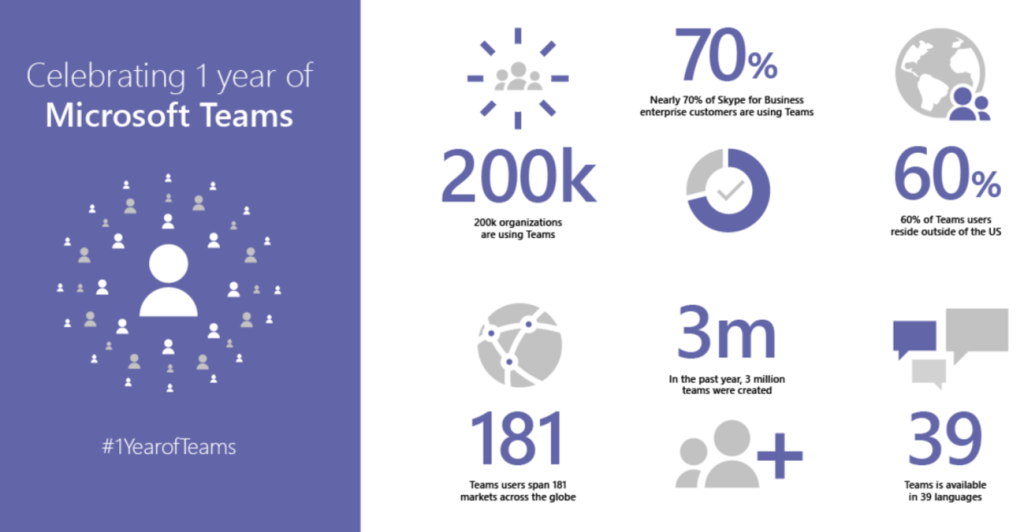 Teams launched worldwide in March 2017 and has seen multiple updates since, including education features, guest access, and tighter app integration. Now, just a few days before the first anniversary, Microsoft is announcing some of the features that are coming next.

The following Teams features are slated to arrive late this year:

Microsoft also announced new enterprise-grade calling features coming to Teams in Q2 2018: consultative transfer, call delegation and federation, and Direct Routing, which will let customers use their existing telephony infrastructure with Teams for calling. Teams is still very much an enterprise-only play — the company stayed mum on rumors of an upcoming free version.

Microsoft’s official stance remains that it has no plans to offer a free version for everyone. And yet, as we’ve said before, if it really wants to take on the competition, a free version that does not require an Office 365 subscription is an obvious move.