Microsoft has never shared how many individuals are using Teams, its Office 365 chat-based collaboration tool that competes with Google’s Hangouts Chat, Facebook’s Workplace, and Slack. It’s therefore impossible to make an apples-to-apples comparison, even though we know Office 365 itself has 135 million business users. All we can say for certain is that Microsoft Teams is growing, and quickly.

In fact, Teams is Microsoft’s fastest-growing business app ever: 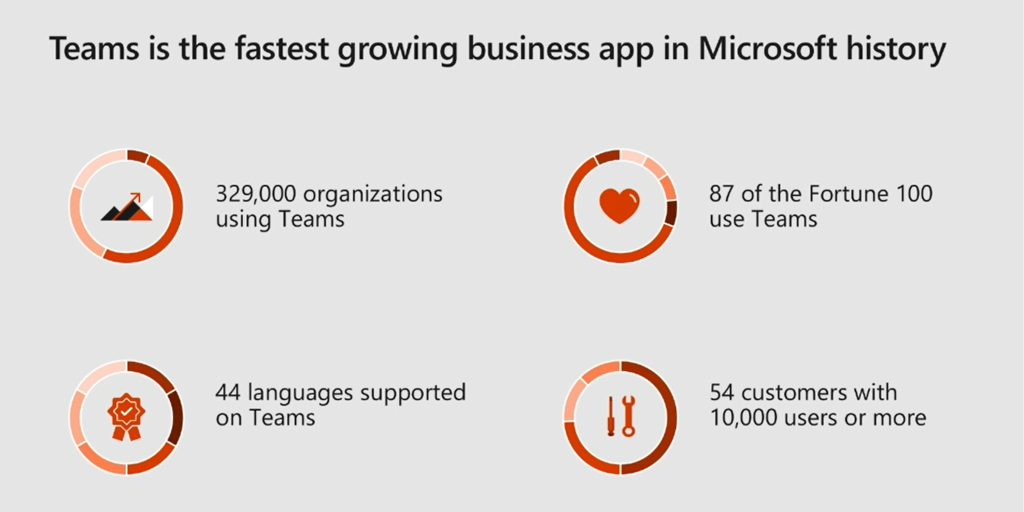 For reference, Google launched Hangouts Chat in February, when 4 million businesses paid for G Suite, and it still hasn’t shared how many organizations use it. Facebook had 30,000 businesses using Workplace as of October 2017. Slack had 8 million daily active users, 3 million of whom are paying customers, as of May.

Microsoft Teams is bigger than Google’s and Facebook’s offerings, and it’s likely gaining on Slack. If it had more users than Slack, Microsoft would surely share individual numbers.

“In less than two years, from the time we’ve introduced Teams, 329,000 organizations around the world are using Microsoft Teams,” Microsoft’s lead of communications, Frank X Shaw, told press ahead of the event. “And for those of you keeping score at home, that is about twice the rate that we see from Slack.”

Two months ago, Microsoft launched a free version of Teams, which should further accelerate the app’s growth. Many attribute Slack’s rise to the free version it offers, and now Microsoft finally has one too (after years of denying one was coming).

Teams launched worldwide in March 2017 and has seen multiple updates since, including education features, guest access, and tighter app integration.

And today Microsoft continued to add to the feature list. AI-powered capabilities such as background blur, which uses facial detection to blur your background during video meetings, and meeting recording, which provides speech-to-text transcription generating a searchable transcript and automatically applying captions to the recording, are now generally available. New live event capabilities that let Office 365 customers stream live and on-demand events in Teams, Microsoft Stream, and Yammer are coming later this year.

Searchable transcripts for when you miss a meeting are great, but the blur functionality could really hurt the number of viral videos out there. “Remember that toddler that photo-bombed the BBC interview? That’s the feature that would have saved the day,” Shaw said.

No fun Microsoft, no fun.