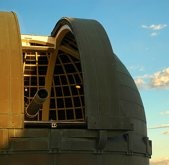 Last week, Robert Scoble proclaimed on his blog that he saw something a couple Microsoft researchers were working on that made him, quite literally, weep with joy. Though Scoble could not yet give specifics, Mike Arrington of TechCrunch today believes (and InsideMicrosoft confirms) that he has figured out what Microsoft is working on: A new piece of desktop software called WorldWide Telescope.

Set to launch at the TED Conference in Monterey, California on February 27th, WorldWide Telescope is said to utilize data from the Hubble space telescope as well other powerful telescopes found around the world to create an extremely detailed map of the cosmos. InsideMicrosoft describes it as being “like Google Earth, except for the universe instead of this planet.”

Though perhaps not tear-worthy, this does sound like a promising and ambitious undertaking for Microsoft — something the aforementioned Google might do, and in fact they already has, with Google Sky, a layer that was added to its Google Earth application in August. However, indications from both TechCrunch and InsideMicrosoft are that WorldWide Telescope will blow away what Google Sky currently offers, though the software will apparently be Windows-only, whereas Google Earth runs on both PCs and Macs.

Microsoft researchers Jonathan Fay and Curtis Wong are leading the project, which is based on some of the work of Alex Szalay and the late Jim Gray. Robert Scoble also promises to have video of the software in action on his Fast Company page on March 3rd.