The main way that Windows 10 S differs from the other editions is that it can only run apps from the Windows Store. That includes Universal Windows Platform (UWP) apps and Win32 apps that Microsoft has accepted into its app store. Not coincidentally, Microsoft is bringing Office to the Windows Store.

The goal is to avoid the problems of traditional Win32 apps that often run in the background and push their own updates. Microsoft wants to stop apps from hooking into the boot and sign-in process to handle all their own updates, which in turn slows down startup time. Windows Store can take care of this today, but Windows 10 S makes it the only way to install and update apps. As a result, Microsoft hopes Windows 10 S will be able to offer faster sign-in times (about 15 seconds) and better battery life. 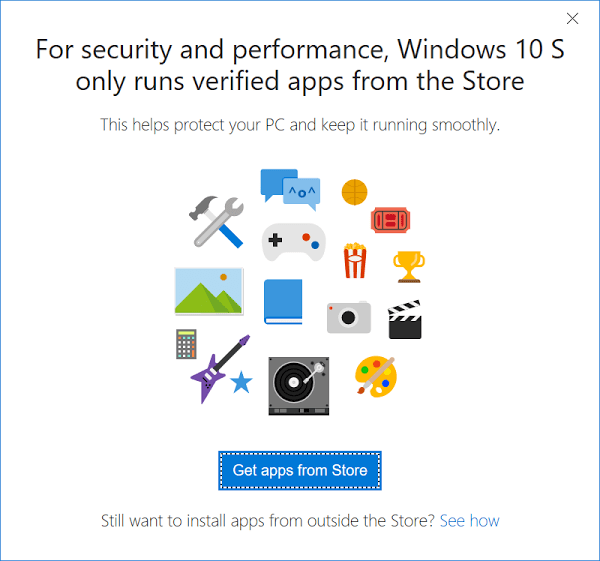 Terry Myerson, executive vice president for Microsoft’s Windows and Devices Group, demoed Windows 10 S on stage. He showed how users are blocked from installing apps from the web (pictured above); how much faster Windows 10 S sign-in is compared to Windows 10 Pro, which has many apps in the boot process; and how schools can manage hundreds of devices. For example, teachers can preload software using only a USB key.

This is still a full version of Windows 10. It’s just locked down to only work with apps that Microsoft has approved, similar to how Apple and Google lock down iOS and Android to their respective app stores.

Windows 10 S also differs in two other ways. It is cloud-manageable (Windows 10 Home is not, but Pro is) through Microsoft’s Intune, Intune for Education, and other modern management systems. It also sets up OneDrive cloud syncing by default, whereas other editions allow the user to skip this step and opt out of using OneDrive.

Here’s the picture Microsoft is trying to paint for schools. You have a 45-minute class. Your students need to be able to sign in on a device they didn’t use yesterday. The login process gets all their content, reliably and quickly. You don’t sit there waiting five minutes for your kids to log in. The devices need to last all day (no battery dying in 7th period). Lastly, the devices need to be easy to manage so you can install and update apps effortlessly.

For the record, the “S” in Windows 10 S does not stand for “student.” It refers to Windows being more streamlined and secure and having superior performance. It’s the same idea as the Xbox One S — Windows 10 S is the core essence of Windows. Myerson called it the “soul” of today’s Windows.

The reason Microsoft isn’t using the word “student” in the name is pretty simple: Although Windows 10 S is clearly aimed at this group, the company doesn’t want to pigeon-hole it. Microsoft is hoping non-students buy Windows 10 S devices as well. If they find it inadequate, they can always upgrade.

Windows 10 S will be easily upgradeable to Windows 10 Pro via the Windows Store. For educators, the upgrade is free. For end users and businesses, the cost is $49.

Schools running earlier Windows Pro editions can move to Windows 10 S for free. This means running a later version of Windows, but they have to be okay with limiting their devices to only Windows Store apps.

Windows 10 S is Microsoft’s answer to Google’s Chrome OS, and even Apple’s iPad push in schools. Myerson didn’t mention the latter, but he did knock Chromebooks a few times onstage. This will be a fierce battle as tech giants strive to have students taught on their own platforms — get them young and you could win them over for life.