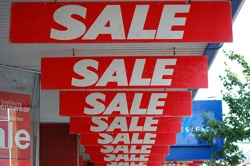 Microsoft just released its prices for Windows 7, the latest version of its operating system, and not surprisingly the software giant is dropping the cost for home users.

For example, an upgrade to the “home premium” version Windows 7 will cost $119.99, while a similar Vista upgrade currently costs around $129.99, and was initially priced at $159.99. (Ars Technica has a more thorough breakdown of how the new pricing compares to the old.) Also, if you buy a Vista PC from participating retailers starting tomorrow, June 26, you can upgrade to Windows 7 for free when it’s released on October 22. And you get the lowest price of all if you live in the United States, Canada, or Japan and pre-order Windows 7 — then the home version only costs $49.99.

All of this makes sense, given the economic climate. Even Apple, which is notorious for its “our fans will pay a high price for quality” attitude, says it will only charge $29 for an upgrade to its Snow Leopard operating system. Plus, there’s the lingering backlash against Vista.

Yet Brad Books, Vice President of Windows Consumer Marketing, offers a rather different spin on things during a question-and-answer session about the pricing: “[This is] by far our most aggressive pricing that we’ve ever done for any type of offer with Windows, but it only goes to show the level of excitement we have about this product, not just our customers.”

[Update: Fellow VentureBeat writer Paul Boutin thinks I’m completely off base with my analysis. Here’s what he has to say:

Windows 7 prices are 10 to 20 percent less than their current Vista counterparts. That’s a discount, not a radical price drop.

Even more of a Great Depression 2.0 pricing story is the new line up of iPhones — the hottest consumer products on the planet. The entry-level price of an iPhone has been cut in half, from $199 to $99. Also, AT&T now offers iPhone buyers only unlimited-data plans. That makes the entry-level $69 per month account a life-changer: $99 for the phone and just under $100 per month total for all the Web surfing and text-messaging your tired little thumbs can tap out. AT&T is paying for most of its customers’ iPhones and letting them run amok on its network, rather than watch them leave the company forever.

During the last financial downturn, Apple was the company that didn’t blink. Steve Jobs proudly unveiled a $3,299 laptop and $129 operating system upgrades. This time around, Microsoft is the company quietly holding its own. That makes a boring story for the press and for anti-establishment bloggers, so you won’t be reading about it much. But any serious  businessperson should take note.]