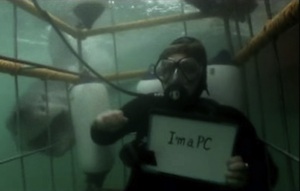 Microsoft’s launch of its new Windows 7 operating system today caps a comeback year for the software giant, where it started to beat back the perception that it’s becoming stodgy and out-of-date. So said Microsoft’s Brian Hall when I interviewed him about the launch yesterday.

To be clear, Hall, who is the general manager of the Windows Live suite of online services, never used the words “stodgy” or “obsolete.” But he acknowledged that Microsoft’s public perception has taken a beating in recent years, to the point where where Windows Vista had become a cheap punchline — as Hall reminded me, I’ve been guilty of some kneejerk Vista jokes myself. But coming off the much more positive response to the Bing search engine and now to Windows 7, things are moving in the right direction again. (In his review of Windows 7, VentureBeat’s Dean Takahashi says he didn’t have a universally positive experience, but he also highlights key improvements and points to other positive reviews.)

If consumers embrace Windows 7, that creates a “halo effect” that makes people feel better about all Microsoft products, such as Windows Live, Hall said. “Most people don’t think about the OS versus the app versus services,” he said. “For them, they’re all the same thing.”

The other piece of that comeback is a campaign that uses the slogan “I’m a PC” to push back against Apple ads portraying PCs as, well, stodgy and out-of-date. The Microsoft campaign includes the famous “Laptop Hunter” commercials, where people go into stores in search of a cheap laptop and, naturally, emerged with PCs.

“We’ve gotten out there and told our story,” Hall said, and that has improved how consumers respond to Microsoft in surveys conducted by outside firms and the company itself. Those good feelings don’t necessarily pay off in an immediate sales increase, but they do point to the long-term health of the business. (Microsoft’s financial earnings this year have included lowpoints like its first ever year-over-year drop in revenue, but it’s still bringing in sizable profits.)

Now, I’m not expecting any mass conversions of Mac fans like myself, it’s promising to see Microsoft release an OS that won’t be the butt of thousands of jokes. And some of the stuff Microsoft is doing with Bing, such as Twitter search, is very cool.

And we can expect Microsoft to keep pushing on all of these fronts, Hall said. With Windows 7, many users won’t switch until they buy a new computer, and while a number of Windows 7 PCs are launching today (and are being sold through the new Microsoft retail stores, plus many other locations), many more are coming. On the promotional front, Microsoft will be advertising the fact that some of its other products are cool again, such as webmail program Hotmail, which Hall said has dramatically improved over the last few years with things like better spam filtering.

“We’re just getting going,” he said.

Beyond releasing good products and doing a better job of marketing itself, Microsoft is also working to evolve for a web- and cloud computing-based era, though those efforts have certainly met with their share of skepticism.