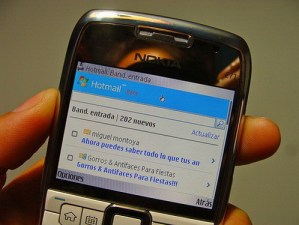 Today, Microsoft unveiled its response to the rise of Google Docs for word processing, spreadsheets, and sharing, in the form of Office 2010 and SharePoint 2010.

Next week, Microsoft will unleash a new version of its category-leading Hotmail email service that carries the fight against Google from corporate IT departments onto the screens of the hundreds of millions of lone users and small teams who swear by Gmail.

And instead of mumbling vague, wussy generalizations about key benefits, the word is that Microsoft’s Hotmail team will come out swinging the bat straight at Gmail’s forehead.

Social networks and Web apps get lots of attention nowadays, but email and search are still far and away what most computer users spend most of their time doing. (Yahoo’s search team reminded us of this during a recent demo.)

It’s important not to lump all email users into one market. This morning’s official rollouts of Office 2010 and SharePoint 2010 are aimed not at individual computer users, but at businesses that most likely already mandate the use of Microsoft’s applications. Forrester Research released a report yesterday that said 81 percent of 115 companies surveyed already use Office 2007, and a surprising 78 percent also support SharePoint. One in three claim to be planning an upgrade to Office 201o in the next year. In corporate offices, Microsoft’s game is one of tower defense against newcomers who haven’t taken much territory.

But outside the corporate firewall, it’s a wholly different fight. Hundreds of millions of people now use and rely on Web-based email as a critical service. For most, it’s a second, personal account for non-work communications. But increasingly, people are using free email on the job. VentureBeat is a perfect example. We use Google Apps to manage our email and calendars. Our full-time employees all have a Gmail account they use for work only. Basically, Google is VentureBeat’s IT department. Microsoft would love to steal the job from them.

Yet the email market is tilting the other way. Gmail, a late arrival in 2004, has gathered enough converts that it’s now close to passing Hotmail to become the number one email service. I could quote ComScore numbers, but a quick look at the addresses in your inbox will be far more convincing.

That’s why Microsoft has totally overhauled Hotmail as an unabashed Gmail competitor.  Next Monday, the company will take the wraps off its new version at a media event in San Francisco. Having tracked Microsoft’s change in strategy for its apps, I can tell you what the most likely new Hotmail features will be, as evidenced by the company’s other recent product releases.

Speed. Microsoft has finally got religion about making its apps fast. Don’t believe me? Download the free Windows Live Essentials desktop apps and test-drive the mail application. With its stripped-down layout and fast loading and display of messages, it looks like a Linux program rather than the bloatware we’ve come to expect from Microsoft. The new Hotmail will be much more like Live Essentials than like Windows Vista.

Threaded and tagged. Gmail’s original selling points were nearly unlimited storage for messages, plus a text-based interface free of jumpy banner ads. But its emergent superpower is that Gmail groups messages into conversation threads. Moreover, individual messages can be tagged manually or by automatic filters, making them easy to find later. Google has figured out the best way to wrangle two hundred new messages a day. If Hotmail’s engineers don’t meet or beat Gmail’s threading and tagging, they might as well stay home.

Mobile access. Gmail works pretty well on most smartphones. But this is war. Look for Microsoft to tout ways in which the new Hotmail works better than Gmail for large numbers of mobile users. The best possible option: Free Hotmail apps for all the top smartphones. And I mean natively written and compiled apps, not run-anywhere Java apps that bog down the phone even when you’re not reading mail. Honestly, I don’t expect that will happen, but I’d love to be wrong.

Social network integration. Google made an edgy attempt to impose its Google Buzz network on Gmail users earlier this year. Microsoft, by contrast, will forego trying to create its own network. Instead, Hotmail accounts will be linkable to existing social network accounts. See the existing Windows Live service for guidance. There, Microsoft reaches beyond Facebook and Twitter to dozens of lesser-known networks. I presume you’ll be able to hook up your Habbo account to Hotmail.