Microsoft today announced something of a surprise during an event this morning in New York City: A new foldable Surface Neo counterpart with phone functionality. It’s called the Surface Duo, and it runs Android instead of Windows.

The outer shell of the Surface Duo is rounded, much like that of the Surface Neo. Inside is a front-facing camera and dual 5.6-inch displays (8 inches when unfolded) of an as-yet-unknown resolution attached by a 360-degree hinge, and around back and under the hood is a Surface logo etched in glass and a Qualcomm Snapdragon 855 system-on-chip, respectively. You won’t find a rear-facing camera, though.

On the software side, the Duo has full access to the Google Play Store and sports a custom skin aligned with the recently announced Windows 10X‘s aesthetic. A number of apps have been optimized to take advantage of the Duo’s screens, like Outlook and Teams. In the former’s case, one screen shows the inbox while the other shows the compose screen. In Teams, a meeting display room is relegated to one screen while the other is reserved for documents. And Duo’s preloaded web browser stretches across both screens. 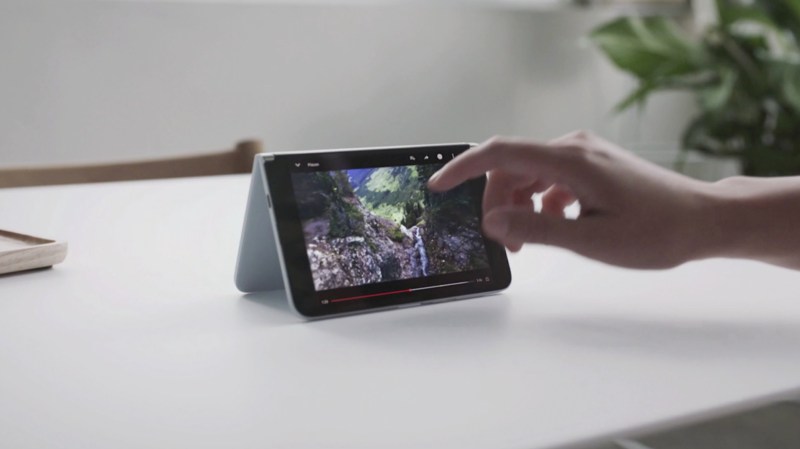 “We’re partnering with Google to bring together the absolute best of Android into one product,” he added. “This is industry-pushing technology.”

The Duo capped off a Surface event spearheaded by first-party hardware, including the Surface Laptop 3, Surface Pro 7, Surface Earbuds, and Surface Pro X. Panay characterized the above-mentioned Neo, which comes with a Surface Pen and a keyboard the folds over one of its dual screens, as a “new category” of devices.