Microsoft has quietly unveiled a new platform that harnesses the power of Minecraft to expedite artificial intelligence (AI) development.

The project is under the leadership of Katja Hofmann, a researcher at Microsoft’s Machine Learning and Perception Group in the company’s Cambridge-based U.K. lab. Called Project AIX, it offers computer scientists the chance to use Minecraft to test out and improve AI research. As an example, a bunch of Microsoft researchers in New York have been using AIX to try to teach a Minecraft character to climb a hill without actually being programmed to do so. The learning process involves trial and error, and the character is given the same tools and resources as a human would when learning to do something new. 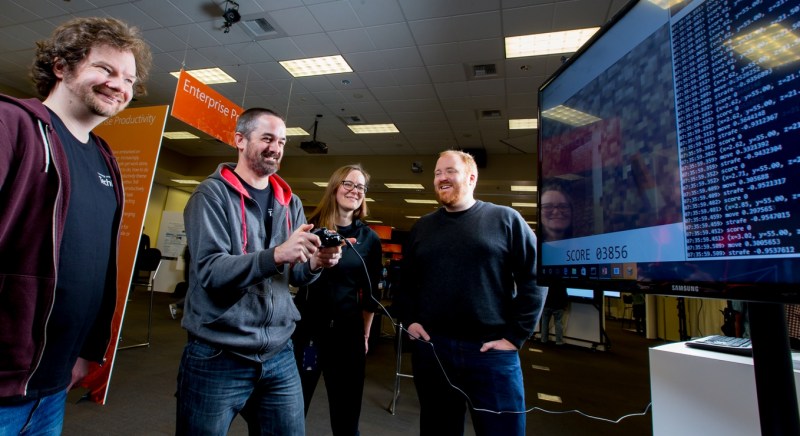 Above: David Bignell, Tim Hutton, Katja Hofmann, and Matthew Johnson are working on the AIX project (2016 TechFest at Microsoft, March 8, 2016)

Mojang, a Sweden-based game development studio that’s best known for its work on Minecraft, was acquired by Microsoft for $2.5 billion in 2014. Since then, Microsoft has been pushing the game in a number of interesting new directions, including forming a partnership with Code.org to help teach kids to code using the virtual world of Minecraft. And back in January, following its acquisition of MinecraftEdu, Microsoft announced a new version of Minecraft for schools.

Using games to advance research in artificial intelligence is nothing new, but Hofmann reckons Minecraft is ideally suited to the task because of the variety of opportunities the game affords. “Minecraft is the perfect platform for this kind of research because it’s this very open world,” she said. “You can do survival mode, you can do ‘build battles’ with your friends, you can do courses, you can implement our own games. This is really exciting for artificial intelligence because it allows us to create games that stretch beyond current abilities.”

Games are not only a great way of researching AI, but also of demonstrating its smarts — just last week, Google’s AlphaGo AI program defeated a human at the Go board game in what was touted as a milestone for machine learning and artificial intelligence.

AIX is currently being used in-house at Microsoft, and it has also been opened to a small group of academics — but kicking off this summer, the platform will be made available to everyone through an open-source license. Adopting an open-source approach means Microsoft can get hundreds or thousands of researchers working to make AIX better, each contributing their own code.