Microsoft plans to release the test version next month of a new product called Microsoft Vine that will allow users to share reports and updates tied to real-world locations, a tool that could be particularly useful for communication during a disaster.

At least, that’s what it sounds like from the relatively scant details released so far by the Redmond, Wash. company. I haven’t had a chance to see the product in action, but Microsoft says there will be three key components: a personal dashboard, alerts, and reports. Alerts are short messages that can be sent in emergencies, with each recipient getting the message in the format (email, text message, or message on their computer) of their choice. Reports are less for less time-sensitive situations, containing information such as your schedule for the week, or a check-in to let friends and family know that you’re okay, and they get sent to the personal dashboards of other users. Those dashboards are the third piece, where you can view information from your connections as well as relevant news stories culled by Microsoft, and reports from the United States National Oceanic and Atmospheric Administration (NOAA), all overlaid on a map.

It’s certainly a different approach to location-based social networks than the more fun services that have been getting most of the attention recently — namely Latitude, Google’s attempt at location-based networking, and Foursquare, the system for “checking in” at various locations that was a hit at the South by Southwest conference, and is now used by almost every tech nerd I know. But obviously location-based information can have more practical, even life-saving, uses. Microsoft has even dubbed this kind of product “societal networking” (um . . .), since it serves a greater good.

So the concept is intriguing, and Microsoft was also smart enough to allow Vine to pull data from more established sites like Facebook and Twitter, so it’s not like you’re building your information and social connections from scratch. But as usual, the real question is whether the execution is solid, and whether Vine is sharing and organizing information in a way you couldn’t on other sites. It sounds like we won’t know for a while, since the beta version launching in May is for Windows PCs only, with Macs, mobile phones, and other devices to follow at some unspecified point in the future. 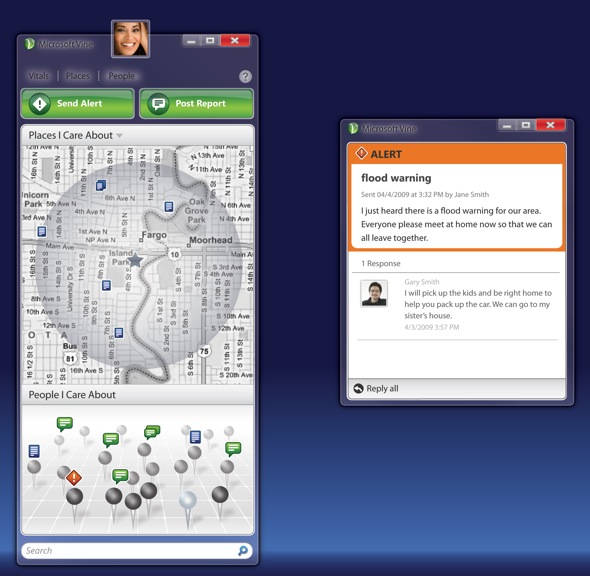