In January, Mighty Bear Games launched its food-fight themed multiplayer Butter Royale game on Apple Arcade. And so far, the Singapore-based game studio is feeling yummy with the results.

The game puts a family-friend spin on the popular battle royale genre, and it’s a good fit for Apple’s subscription service, which costs $5 a month and now has 113 iOS games available.

“There’s been a lot of love for the game, with a very engaged community,” said Might Bear CEO Simon Davis in an interview with GamesBeat. “People are very happy. There’s a lot of positive sentiment on social media. We’ve even had very nice pieces of fan art from some of our younger players.”

The game is set in the near future, after the world places a global ban on weapons. To resolve disputes, players engage in food fights on Butter Island. They use “Nutritionally Operated Machines” (NOMs) to launch food at one another during five-minute matches while trying to escape floods of butter to get to safe zones. As with most battle royale games, the circle keeps contracting, forcing the players together. 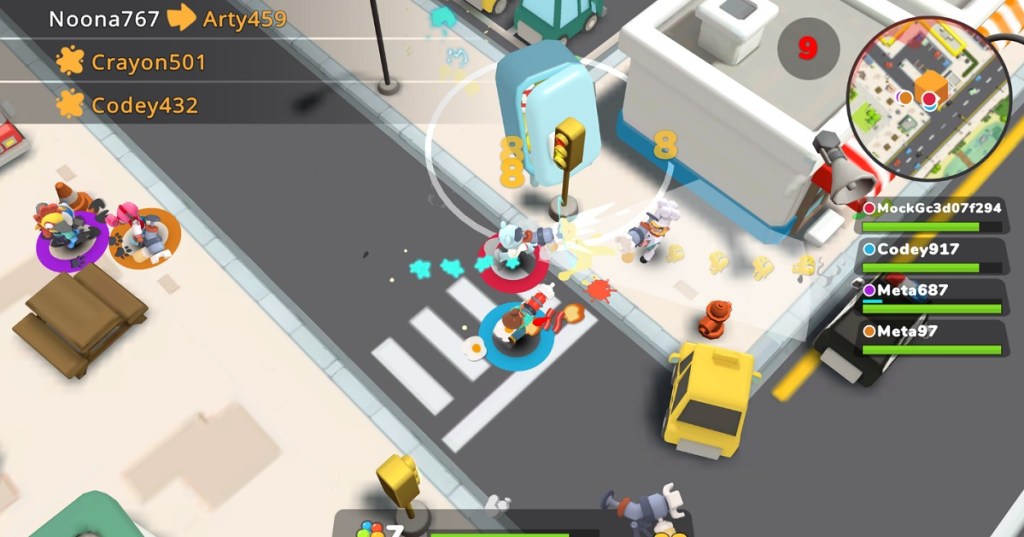 Like other Apple Arcade games, it is playable across iPhone, iPad, Apple TV, and Mac. With Family Sharing, up to six can play on a single Apple Arcade subscription.

It has no in-game chats, and as an Apple Arcade game, it has no in-game advertisements, loot boxes, or in-app purchases. In the game, you can earn legendary items that can make you more deadly on the “butterfield.” The map has regions such as San Francheesco. The host of the game is Caesar Salads. You don’t have to drop from a plane, so it’s best for you to spawn near your squadmates.

I got a few kills (including a triple kill) in my first game, so it wasn’t so hard. We had to communicate a lot because it wasn’t always easy to figure out what was happening. It came down to just two of us, and I finally got “creamed” in the last battle with one other player. So we came in second place. On the couch, there was a lot of cheering.

When the game kicks off, you scramble through the map to pick up a weapon and some ammo. If you’re hit, you need to find first-aid kits. You can also pick up a shield to protect yourself. And when the enemies close in on you, you have to hit them fast or go out in a blaze of glory. The food fight is spectacular. 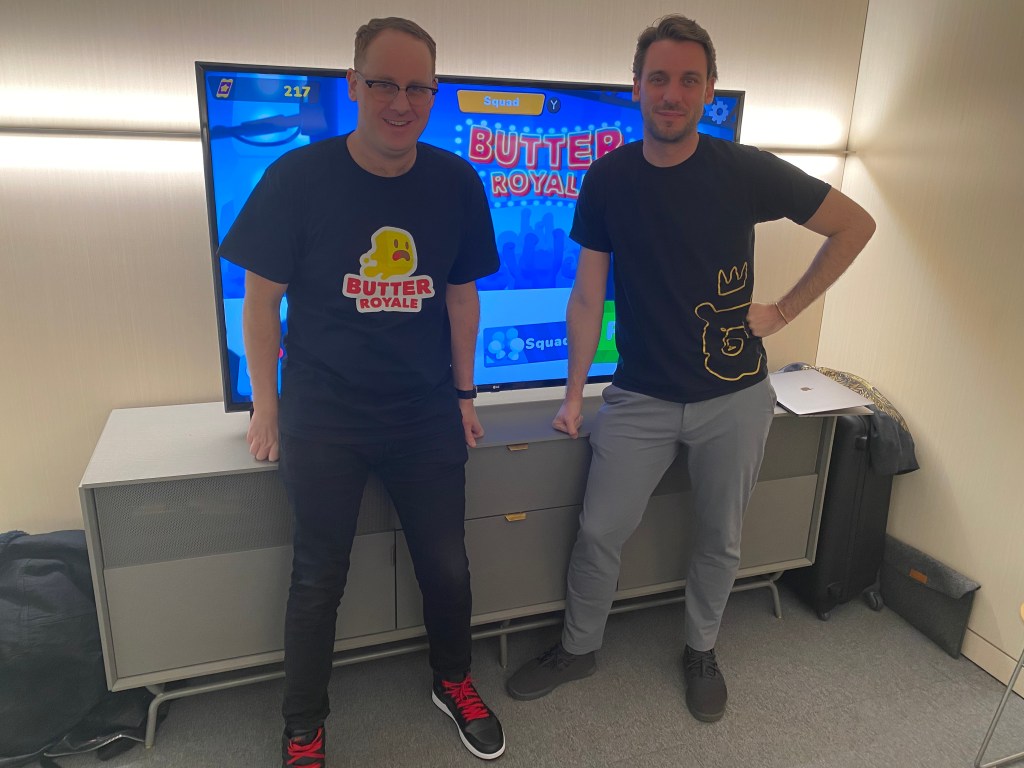 Mighty Bear Games was founded by three game veterans: Simon Davis, Benjamin Chevalier, and Fadzuli Said. The team has experience in games at places such as King, Ubisoft, Bigpoint, LucasArts, and Disney.

Mighty Bear was spawned at Pixel, an incubator set up by the Infocomm Media Development Authority of Singapore. The team came from the ashes of Nonstop Games, which shut down in 2016, and Mighty Bear Games raised millions in a round of funding in mid-2018.

Originally, the team was focused on making a single-player game. But then Davis and Chevalier had a discussion about making a family-friendly game in the shooter genre. Davis has a 4-year-old nephew, and he enjoys playing games with him.

Two days before the leaders were supposed to go visit Apple and pitch a different game, they had an idea. While joking around at the office, they came up with the pun, “butter royale.” 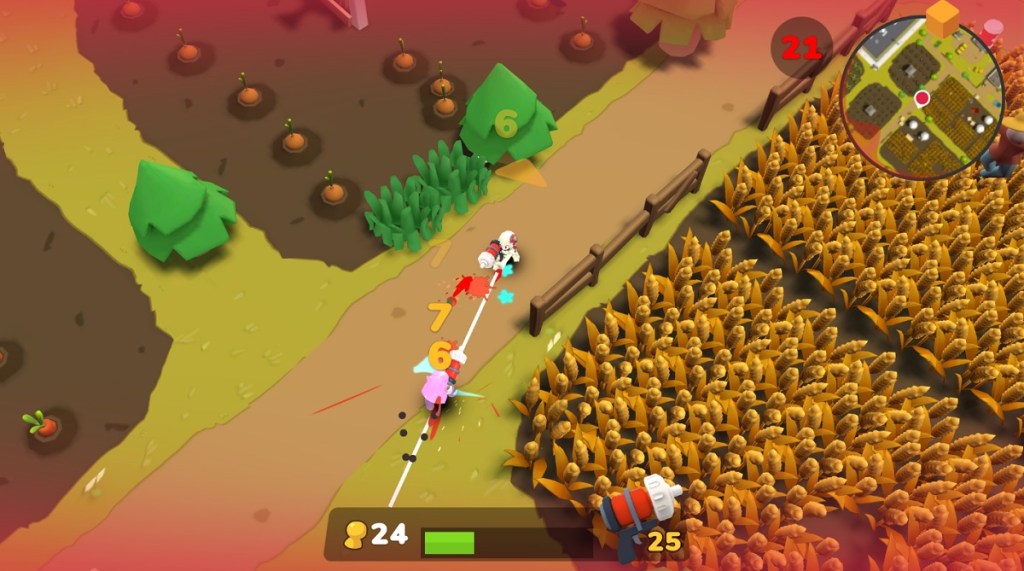 Above: Action on the Butterfield in Butter Royale.

“In two days, we smashed out a very high-level pitch deck for the game,” Davis said. “And we presented two concepts.”

“Singapore is a very food-focused country,” Davis said. “Food is a big deal. For the team, lunch is a big deal every day.”

Apple approved the pitch in June, and the team of 20 developers sped along. Within six months, they were done.

“We’re a very senior team,” Davis said. “Some of us have been working together for five years. With such a group of people, you have fewer miscommunications. And this was designed specifically for Apple Arcade, which has the same family values. It is accessible, but it has depth for the highest-skilled players.”

They also added a lot of diversity for the 52 characters, with 14 clearly identified as female and 15 as people of color. (For many of them, they’re wearing masks and the like so you can’t tell).

Above: Butter Royale is adding quests in its next update.

The team is working on an update, and it will do more with seasonal content over time. It will include a new quest system for online players.

Players can complete daily and weekly quests, and squad goals, for additional rewards. Rewards include XP, Offline Currency, and Season Currency. Players can unlock bonus quests by completing all daily or weekly quests.

As for working on Apple Arcade, Davis said he is happy.

“We only have to focus on making a really fun game,” he said. “If you are making a free to play game, you’d have to balance the incentive to monetize with the time. I think for this kind of game it becomes a much better product.”