Do young gamers want stories? Telltale Games is about to find out.

The first episode of Minecraft Story Mode is out next week, but fully voiced, heaving on narrative and rendered outside the game engine, this is anything but a simple update to the blockbuster building game.

On October 13 Minecraft Story Mode arrives on PlayStation 4, Xbox One, PS3, Xbox 360, PC and Mac. It will then come to Android and iOS on October 15 and has been promised for Wii U.

Speaking to Job Stauffer, the director of creative communications at developer Telltale Games ahead of next week’s Minecraft Story Mode’s launch hoopla, I asked whether the size of the audience was intimidating?

“It is daunting but we’ve been making games for over ten years and are up to the task. It’s a lot of pressure but working with Mojang and exploring what is possible in the world of Minecraft I think we are ready to go.”

That pressure is made no easier in light of Microsoft’s $2.5 billion acquisition of Minecraft. I asked Stauffer if this translated into a bigger budget for the game. He side-stepped, saying, “We certainly have a bigger audience. When our friends at Microsoft came into the picture I think they were pleased that Mojang had already fleshed this out.”

It looks the part visually, but with flexible limbs and dramatic camera angles, this isn’t Minecraft as its community knows it. Is it just another conversation-led adventure game from Telltale with a Minecraft skin? “It’s built in Minecraft but then gets shifted to the different development platforms. It’s truly a mashup.”

Being careful to highlight that is separate to the main game, and just their take on the block based universe, Stauffer talked about the opportunities for story telling this introduced. “Minecraft presents strong core themes around survival and creation and working with friends. For the first time you can choose the gender and appearance of your character in the game, Jesse.”

With the game being rated as only suitable for over 12s in Europe (its rating is E 10+ for Everyone in America) and voice talent usually associated with mature video-games, is Minecraft Story Mode in danger of leaving its core audience behind? “It’s our first all-age adventure for a while, perhaps since Back to the Future or Monkey Island. When we sat down to think about the story we wanted to tell, we wanted to evoke the all ages adventures we grew up with. We threw three things on the board, The Goonies, Ghostbusters, and Pixar movies.”

The PEGI 12+ rating references the game’s use of language like “piss” and “ass,” so I asked Stauffer for his take on who the game is suitable for. “Being E 10+ for Everyone in the US, we maybe have a two-year sensibility difference in our standards for parenting. There’s no intensely coarse language or violence or gore in the game. We wanted to tell a story that evoked those classic movies we grew up with and many of those movies were PG rated.”

One character that stands out in the demo is Petra, whose voice actor is Ashley Johnson (The Last of Us). “Ashley Johnson plays Petra the fierce explorer of the nether and more often than not comes to save your back.” I ask whether this is a reference to Ellie in The Last of Us. “We’re certainly influenced by stories that we love. It’s feeling like a mashup of everything we love.”

With the first episode, The Order of the Stone, out next week, I asked how soon we could expect to see episodes 2 (Assembly Required) and 3 (The Last Place you Look). “More episodes will roll out quickly. Typically, they will come every six-to-eight weeks. Episode 2 is following before thanks giving currently. We could have multiple episodes out by Christmas this year.”

In terms of platforms, we already knew it was slated for Console, PC, Mac, iOS and Android, but Stauffer revealed it would also be the first time Minecraft comes to a Nintendo platform. “We should also have a date for download on Wii U the first Telltale title on the platform.” 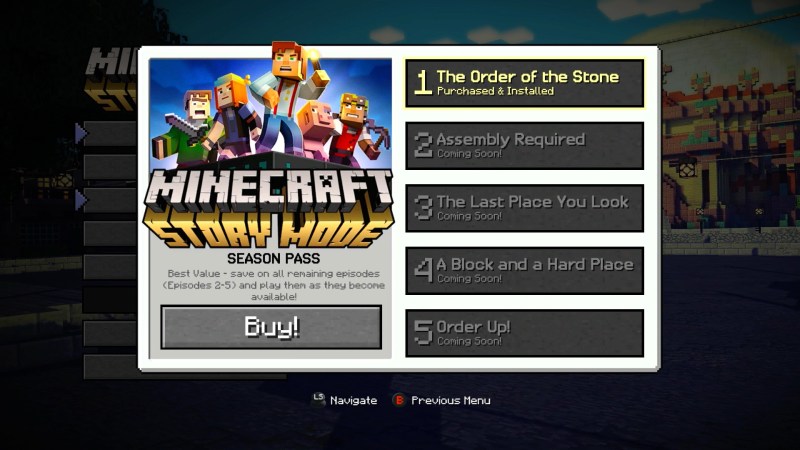 Spending time talking to Stauffer about Minecraft Story Mode it was hard not to catch his enthusiasm. Certainly the combination of those familiar pixel-shaded blocks and Telltale Games’ mature story telling is now something I’m looking forward to sharing with my family.