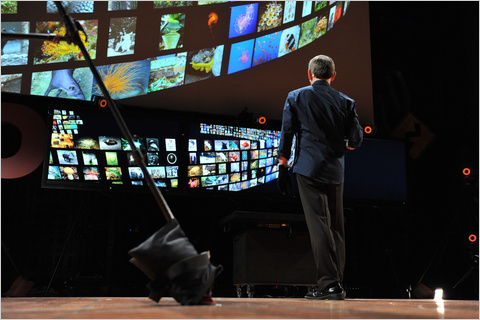 One reason Cruise’s gesture-based interface was so striking was that it was based on Underkoffler’s serious deep-end work in user interfaces. The g-speak Spatial Operating Environment requires gloves much like the ones Cruise wore as Precrime murder-prevention officer John Anderton.

g-speak’s website is hard to follow if you don’t already work in the field. Here’s my edit of their description of what the Spatial Operating Environment does, and why it’s useful:

Modern computers have high-definition, large-display graphical output. By contrast, the old mouse and keyboard are very narrow channels for input by humans.

Gestural input and output lets humans input data and commands to a computer system at a much higher rate than a keyboard and mouse ever could.

Where does gestural input win big over a mouse? Gestural input is measurably more efficient at performing complex navigation, sorting and selection tasks.

(Notice they didn’t say it’s faster at letting you compose a message than a QWERTY keyboard. Better speech recognition will probably be the solution for high-speed word input.)

Every graphical and input object in a g-speak environment has real-world spatial identity and position. Anything on-screen can be manipulated directly. For a g-speak user, “pointing” is literal. You reach out with the special gloves and point at, or touch, or grab, or manipulate objects visible in the display.

g-speak is designed to work on all kinds of displays. Wall-sized 3D screens can co-exist with desktop monitors, table-top screens and hand-held devices. Every display can be used simultaneously. g-speak moves data selectively to the displays that are most appropriate.