Personal finance site Mint says its average user has cut expenses by $400 a month starting last summer, with a further $200 drop in November and only a slight subsequent rise due to holiday spending. The average user has also seen their savings drop and their debt rise — but due to loans not credit cards. Given that the site has 900,000 total users — many of whom are presumably relatively well-off early adopter types — it’s an unrepresentative but interesting new data point showing how the recession is affecting individual spending. 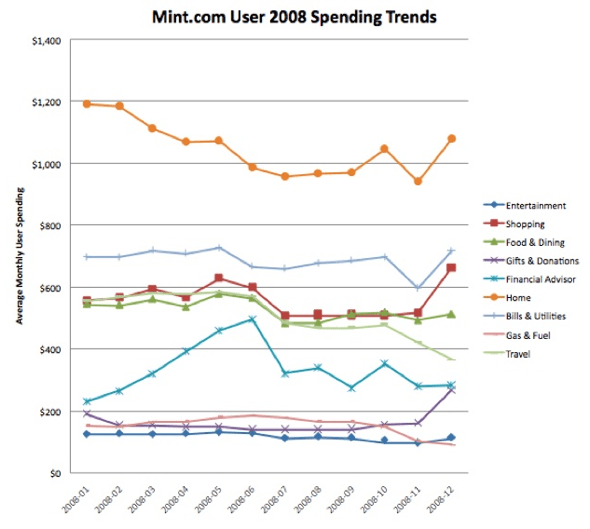 The only area where people are spending more money is on financial advisers, which has perhaps helped Mint grow from 500,000 users last October. Now might be a good time for Mint to start offering some premium services? It already shows you ways to save money, such as credit card offers featuring better interest rates (and it takes a cut when people choose the new service).

Mint is the sort of service I’d be willing to pay for. I’ve been using it regularly since it launched in September of 2007. It has helped me easily organize and track my spending patterns for things like restaurants — in ways that I know I wouldn’t get around to doing otherwise. I can break down spending by categories, subcategories, then set budgets and track spending using nice-looking bar and pie charts.

Speaking of spending, and of spending money for a web service, Mint has also reminded me which other web companies I’m paying. 37signals, for services like chat room Campfire, and — despite not using them much — premium services offered by business network LinkedIn and social contact service Plaxo. Surprisingly, I spend less on 37signals than the average Mint user, which says something about the company’s user base (see lower screenshot).