SAN FRANCISCO — Wearable computers have generated a good deal of hype and crowdfunding dollars, but it’s still early days for this technology.

The new wave of health and fitness tracking devices are popular with a niche group of Silicon Valley insiders, professional athletes, and health fanatics. It will take time for mainstream adoption.

At Rock Health’s Innovation Summit, Misfit Wearables chief executive Sonny Vu admitted that his company is facing a number of practical challenges. Battery life is still a problem, and the design research team has found that gadgets need to be either “gorgeous or invisible.”

Vu has opted for gorgeous. The Shine activity tracker is popular with women. In itself, this is a rare fear for wearable device makers. Vu told me that his research experience team found that over 30 percent of women won’t wear an activity tracker on their wrist for a variety of reasons. 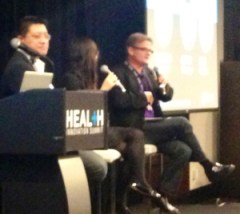 Shine, which its first reviewers have called “fitness-tracking jewelry,” monitors your activity. About 40,000 of these devices shipped in the first month.

Shine’s compatible with a variety of wearable accessories, lasts four months on a single battery, and is waterproof. The downside is that it doesn’t display detailed data on the device and it currently only works with iOS.

Misfit Wearables adviser John Sculley, who is also the former CEO of Apple, told me recently that the company’s primary value is the data and analytics component.

Shine is collecting a vast store of potentially valuable data about the human body. Turning this data into meaningful insights for people is key — for instance, a wearable device maker may know that you load up on sugar on Friday afternoons, and this is negatively impacting your health in specific ways. To do more with the data, the company has hired a team of data scientists and analysts, primarily based in Vietnam.

“We are trying to hit that first layer of making the information useful,” said Vu. “But delivering insights and actionable things you can do, that is hard. It will take time and a lot of data.”

On a more positive note, Vu pointed out, fitness tracking gadgets are rapidly evolving. Take pedometers, which some now call “activity monitors.” These devices now track a variety of your body functions, and not just whether you’re hitting your exercise targets each day. “Life is more than just steps,” said Vu.

Some of the most futuristic devices on the market are under development from Emotiv, a company that specializes in wireless headsets that monitor brain activity. Emotiv is currently developing a new mindreading Epoc headset, which has already smashed Kickstarter campaign targets, raising over $600,000 of a $100,000 goal with 37 days to go.

Tan Le, who spoke alongside Vu, describes this new device as “second generation.” Le has the opposite problem to Vu; the device is already offering highly actionable insights to consumers. However, it’s not quite as elegant, so it’s been a challenge to get people to wear the headset every day.

“Really it’s an evolving space,” said Le. “We need to understand we are pioneers.”