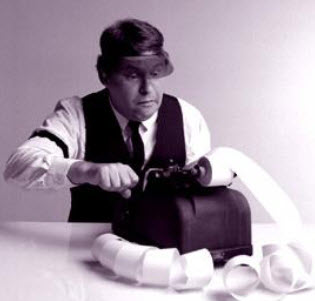 Lyric Semiconductor hopes to find a gold mine in checking memory errors. The Cambridge, Mass.-based company has created a new kind of computer circuit that calculates probabilities much faster than traditional computer chips. And its first real application is in error correction chips for flash memory devices, which have become ubiquitous in everything from cameras to servers.

If the technology works properly, Lyric could create processors that are a thousand times more efficient in cost, power and size. Specifically, the company’s first chip, the Lyric Error Correction, is 30 times smaller than today’s flash memory error correction chips. It is 12 times better in terms of power consumption, and it can operate faster than traditional chips. Error correction may not be that sexy, but it’s a critical function, since flash memory chips are never 100 percent reliable. And error correction is simply Lyric Semiconductor’s first market opportunity, with the potential to save billions of dollars. Other more lucrative chip markets await.

The technology is the brain child of Ben Vigoda, chief executive of Lyric. He worked on the technology starting more than a decade ago for his doctoral thesis at the Massachusetts Institute of Technology. Working with professor Neil Gershenfeld, Vigoda figured out how to create a new kind of fundamental chip component, known as a logic gate circuit. In typical computers, data is processed as ones and zeroes in on-off switches known as transistors. But Vigoda’s circuits are more like dimmer switches instead of on-off switches. These circuits can accept inputs and calculate outputs that are between 0 and 1, directly representing probabilities, or levels of certainty. 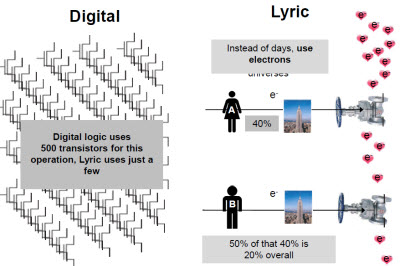 “The biggest computers in the world are being used to make educated guesses about what you really want,” Vigoda said in an interview. “Is it likely that this credit card purchase is valid or fraudulent? What kind of movie are you likely to want to watch next on Netflix? Probabilities are very important, but computers are not designed to calculate them.”

A digital computer uses a processor that steps through calculations one at a time, in a serial fashion, to perform a function. Lyric’s processors are designed to handle many probability computations in parallel. Where it might take 500 transistors for a digital computer to calculate a probability, the Lyric approach would just take a few. Thus, the Lyric components can do a calculation more efficiently, with fewer circuits and less power, than a digital processor.

The applications are many, says Mira Wilczek, director of business development at Lyric. Lyric’s approach can be used to accelerate search, fraud detection, spam filtering, financial modeling, genome sequence analysis, and many other important applications. In all of those applications, the task is to consider many possible alternatives and decide on the best fit. In other words, Lyric is very useful when you have to make a best guess at the answer to a problem.  Modern computers consume an incredible amount of resources solving these problems.

But Vigoda’s initial task for his probability processing technology is the modest field of error correction. Today, banks of flash memory chips have to reliably store data. But once in a while, they make mistakes about one in every 1,000 times a memory cell is read. The problem is getting worse with each new generation, with the errors likely to go to 1 in every 100 reads because the memory cells used to store data will be so tiny.

To doublecheck the reliability, error correction calculations are constantly made. Good error correction can reduce the error rates to one in many trillions. But the task is so complex in traditional computing that most of a controller chip (which accompanies flash memory chips in a system) is now dedicated to error correction.

Vigoda founded Lyric with chip industry veteran David Reynolds in 2006. In 2007, Stata Ventures — the venture fund created by Analog Devices founder Ray Stata — invested in the company and Stata became its chairman. That opened some doors, and more opened after the Defense Advanced Research Projects Agency and other government agencies decided to support the company with more than $20 million in grants. The company now has 30 employees. The development took a long time because it was very hard to make the proper tools for programming the probability processors. 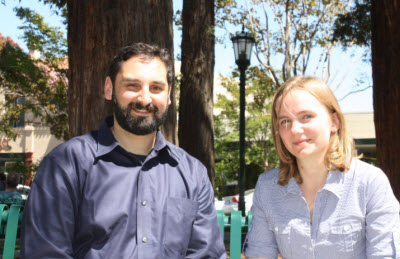 The good thing about the technology is the new circuits can be built in any chip factory and they are not that difficult to build. Lyric’s error correction technology is available for license by chip makers, who could likely integrate it into their flash memory systems within 12 months. All of the world’s flash memory chip makers have expressed interest in the technology, as it could save them billions of dollars.

The company has applied for or received more than 50 patents in the field of probability processing. The real question for the technology is whether probability processing can solve problems faster than traditional means and whether they can find many types of problems to solve. If the new way to compute turns out to be too narrow, it is not likely to gain the broad adoption it would need to unseat traditional computers. (Picture: Vigoda on left, Wilczek on right).

At some point, Vigoda wants to create a general-purpose probability processor. Lyric is developing the GP5, which could be applied to a wide variety of applications and run them 1,000 times faster than competing processors from Intel and Advanced Micro Devices. The GP5 will run code written in Lyric’s own probability programming language, dubbed PSBL (Probability Synthesis to Bayesian Logic). Vigoda says the programming language is not exceedingly difficult for computer programmers to learn.With one of these processors, scientists might be able to compute an entire genome sequence in 10 minutes for perhaps $10 in cost.

It could be very disruptive, but it’s also very hard to introduce this kind of structural change to an industry that has worked a certain way for decades. Lyric plans to ship its first GP5 chips in 2013.

Vigoda will talk about the technology at the Flash Memory Summit on Wednesday at the Santa Clara Convention Center in Santa Clara, Calif. He will also present at the International Symposium on Low Power Electronics and Design in Austin, Texas, on Thursday. Vigoda said the company will raise money at some point, but does not need cash at the moment. He says it’s not likely that someone can match this kind of technology anytime soon.

“We had to rethink the computer from the ground up,” Vigoda said.