When Estonian entrepreneur Ardo Reinsalu began thinking about where in Europe to base his new startup, it didn’t take him long to decide on Munich.

After spending nine years as the head of a committee advising the Estonian Development Fund, he had a good feel for the various pros and cons of all the continent’s various tech hubs, including Berlin. He electric scooter sharing service for corporations, Stigo, is focusing on Berlin, Hamburg, Frankfurt, and Munich, with employees in each.

And so placing the headquarters in Munich, he says, was mainly a function of practical choices and convenience. Besides seeing more venture capital moving there, the cluster of large corporate headquarters and offices in Munich means “it’s where a lot of business-related decisions are made.” 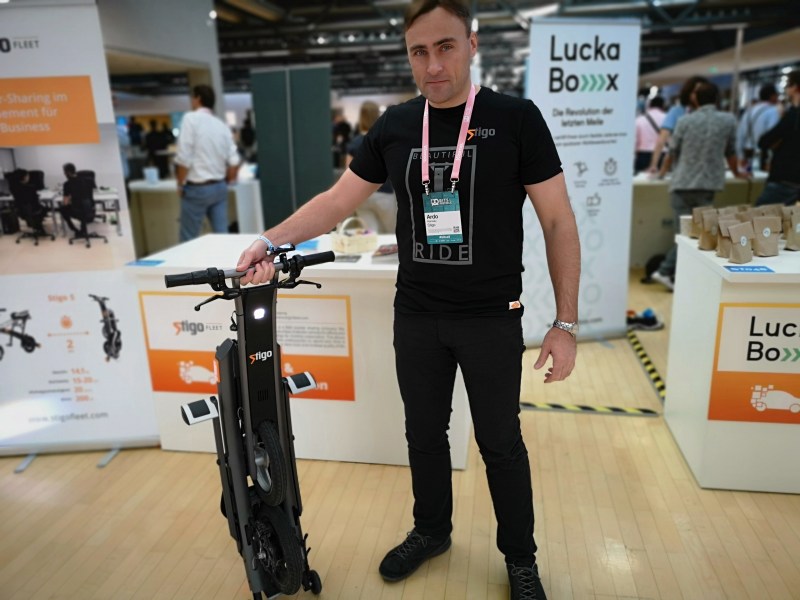 Above: Estonian entrepreneur Ardo Reinsalu, CEO and founder of Stigo.

During a visit to Munich for the Bits & Pretzels conference in early October, this was a sentiment I heard echoed by many of the participants in the region’s growing tech ecosystem. While Berlin is a great creative community for young entrepreneurs and startups, they say, Munich has a much richer network of opportunities to partner or sell to its constellation of large corporations, as well as a wealth of programming talent.

Berlin may be more glamorous and hip, but Munich is the place to get business done.

“Things are bigger and more established in Munich,” said Joel Spolsky, CEO of Stack Overflow, which has one of its three main offices in Munich. “If you’re selling to the tech industry, you’re better off being in Munich.”

Shining a light on Munch’s sometimes overlooked tech economy was the very reason Bits’ three cofounders Andreas Bruckschlögl, Bernd Storm van’s Gravesande, and Felix Haas launched the event in 2014. Each was an entrepreneur, but wanted to promote the region’s considerable strengths.

“We felt that no one was talking about Munich as a tech startup city,” said Bruckschlögl. “We felt that Munich was underrepresented. The city needed people to be missionaries.” 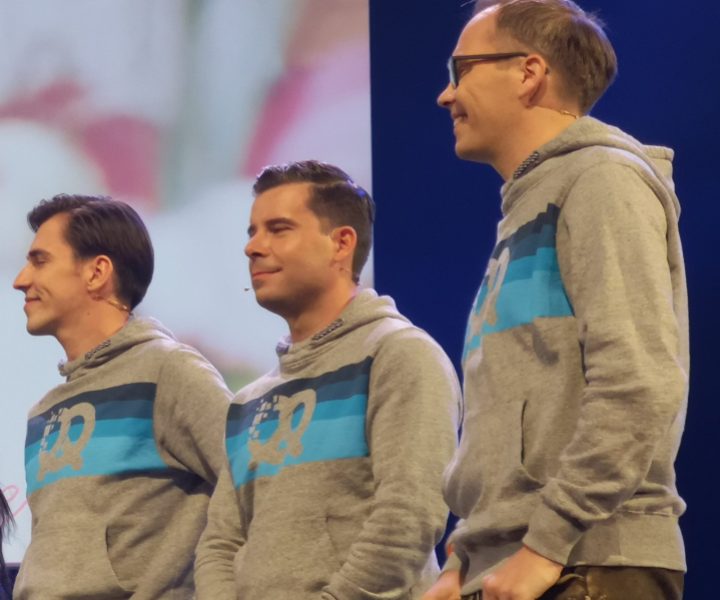 There is no denying that Berlin remains Germany’s true startup hub. A report in 2017 from consulting firm EY noted that 70 percent of the venture capital raised by Germany’s top 100 startups went to Berlin. Hamburg was second with 8.1 percent — though that is a bit skewed because local favorite Kreditech Holding has raised almost $500 million, one of only five Hamburg-based startups on that Top 100 list.

Munich ranked third with 7.9 percent of the money raised, and has 13 companies on the list. But just as importantly, the range of those startups, from AR to deep tech to mobility, shows the breadth of the region’s technical prowess. They include local Nest rival Tado, which just raised a round of $50 million. Flixbus, which has developed digitally driven alternative bus and train services, is also based in Munich.

So is IDNow, which is building a mobile facial recognition platform for authenticating transactions. Local unicorn Celonis has raised more than $80 million in venture capital for its platform that analyzes data and optimizes operations for large companies. And augmented reality startup Reflekt is developing applications for enterprises.

Those companies have gotten a boost as more venture capital financing has drifted south to the Bavarian capital. Emblematic of that trend is Munich-based Digital+ Partners, which closed its first VC fund this summer of €350 million ($400 million). Founded in 2015, the firm focuses on industrial tech and fintech, and joins a growing roster of VC firms either based in Munich or with offices there.

“Munich has really evolved over the last couple of years,” Haas said. “We used to think we had to go to Silicon Valley. And then Berlin. And now it’s all happening in Munich.” 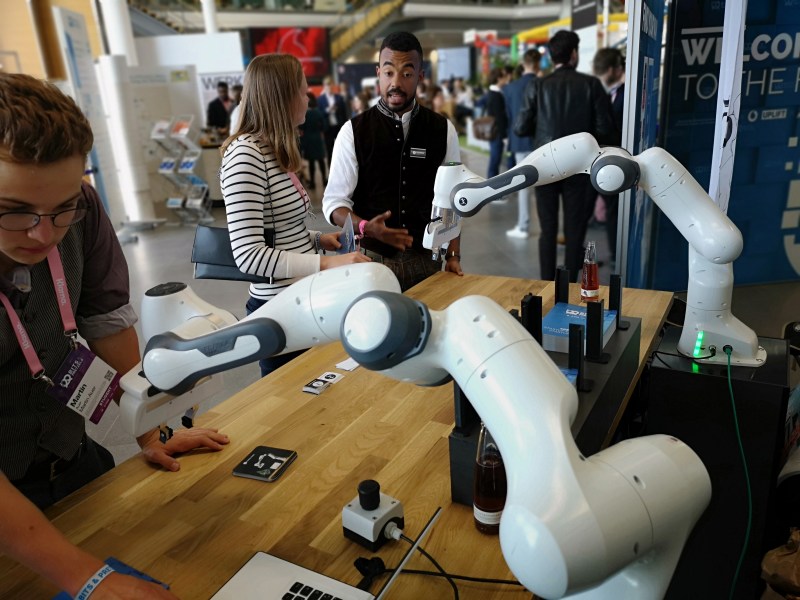 Above: Munich’s Franka Emika showed off its collaborative industrial robot Panda at the Bits & Pretzels conference.

Of course, another way to look at Germany’s tech scene and how it’s different is the distribution of developers. The tech ecosystems in other European countries tend to be highly centralized around capital cities such as London and Paris. Not so in Germany, however.

A large part of that community is there thanks to the massive corporate presence of tech and non-tech companies that wish to be more tech savvy.

On the mobility side, BMW is based in Munich, as is its BMW Startup Garage. The Audi HQ is about 60 miles away, making the region a focal point of connected and autonomous mobility development. And aerospace giant Airbus has a big presence here, having opened its material lab in 2016, which includes the headquarters for its industrial 3D printing research team.

Thanks to the tech talent and its local universities, Munich has also been a big draw for U.S. tech companies. Those with offices in the region include Adobe, Amazon, Cisco, Google, Hewlett Packard, Intel, Microsoft, Oracle, and RedHat.

That roster also includes IBM, which in 2015 opened its Watson IoT Global Headquarters in Munich to house 1,000 developers and researchers. Located in Munich’s Highlight Towers, the company said it was IBM’s biggest investment in Europe in more than two decades.

And earlier this year, Google announced a long-term partnership with the Technical University of Munich (TUM), including a €1 million ($1.14 million) grant to develop artificial intelligence, machine learning projects, and robotics. Google now has about 500 employees in Munich.

“Automation and robotics are key elements of the fourth industrial revolution that we are currently experiencing through advances in artificial intelligence,” said Eric Schmidt, the executive chairman of Google’s parent Alphabet, in announcing the partnership. “The concept of Industry 4.0 was developed here in Germany, the home country of all industries. We’re delighted with the opportunity to work in this important area in our partnership with TUM and UnternehmerTUM.” 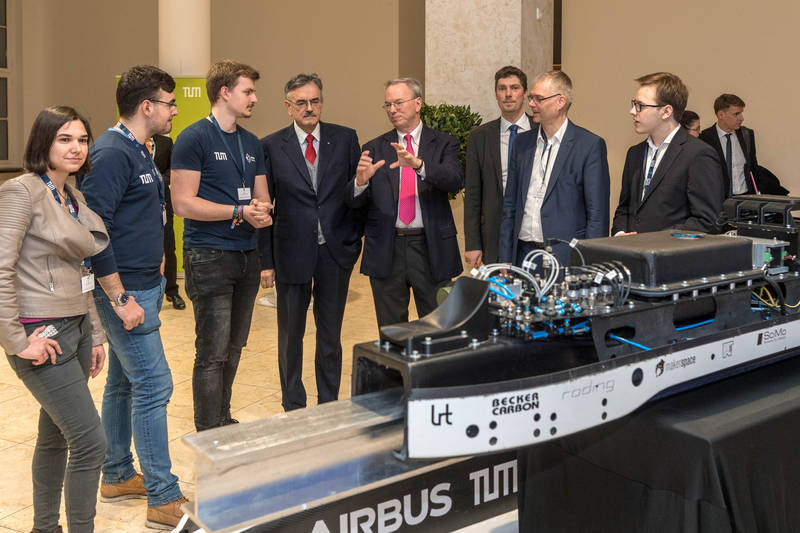 Above: TUM students showing Eric Schmidt their pod, which set a speed record at the Hyperloop competition in the USA.

On the homegrown front, industrial tech giant Siemens is also based in Munich. The company has created its own corporate VC fund, Next47, which invests in startups disrupting industry, energy and infrastructure. And Siemens recently opened a massive new headquarters in Munich for 1,200 employees. 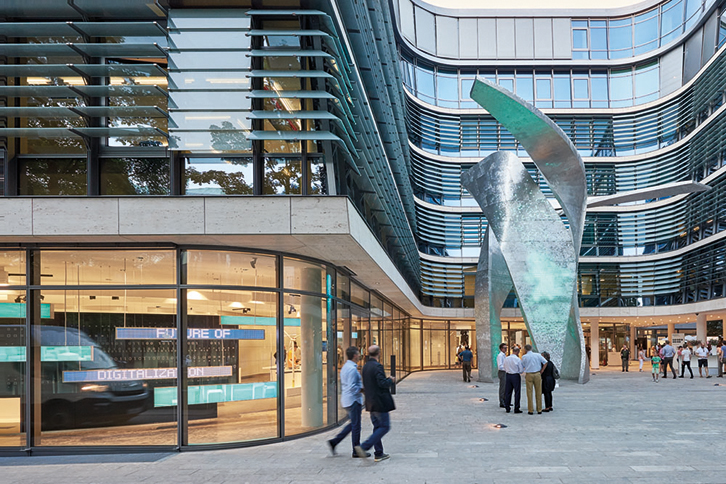 Above: Siemens’ HQ in Munich.

As with many tech hubs, however, success and momentum can also bring challenges. Munich is already an expensive city, even by German standards. The presence of all those corporate giants, particularly from abroad, can make competition for talent tough, and increasingly costly. And as Berlin saw recently when Google pulled the plug on a planned office there amid a local backlash, waves of tech immigrants can cut both ways.

“Munich itself is booming,” said Storm van’s Gravesande. “It’s such a run for talent here. That’s the big issue we have to solve.”

(Disclosure: Bits & Pretzels paid for VentureBeat’s travel and accommodation to the conference in Munich.)