Mixed reality — augmented and virtual reality — is the next computing frontier after the emergence of PCs in the 1970s, the web in the 1990s, and mobile in the 2000s. This is the most unique of those shifts because mixed reality is the first tech to blend the digital and physical worlds.

In today’s hyper-connected world, we have a powerful computing interface, the smartphone, which helps us access immersive experiences on the internet. However, the immersiveness is limited to the rectangular frame of the smartphone. A mixed reality interface combines varying degrees of real and virtual elements on the same display to create immersive experiences, and the device is hyper aware of it’s real-world surroundings. This means mixed reality has the potential to replace our smartphones, computers, TVs, and other common computer interfaces.

If you look at the industry life cycle, while the smartphone application market is maturing, mixed reality is in the ‘introduction’ phase with the growth of several successful prototypes of smart glasses. The timing is perfect for investors to take advantage of this new digital environment as the hardware develops and meaningful applications are built along with improving internet connectivity.

Imagine if you had invested in Apple or Microsoft during the PC revolution. Apple sold 33 percent of their company for only $250,000 to a PC insider, Mike Markkula, a stake now valued at roughly $280 billion. Similarly, during the Web revolution led by Amazon, Google, and Facebook, an investment of $500,000 would have bought you 33 percent of Facebook. Peter Thiel, an inside investor, was able to purchase such a stake which is now worth $180 billion. Once again, in the mobile revolution an investor in Uber’s first round of fundraising invested at a $4 million valuation.Just a few years later, Uber is worth roughly $40 billion.

Mixed reality is heating up

At the end of 2017, we saw that several top Fortune 500 companies have invested in this major platform shift. Apple and Google released mixed reality developer tools (ARKit and ARCore), Amazon released Sumerian, a web-based mixed reality creation tool, Facebook released AR Studio for their messenger platform and Tencent announced QAR, an AR framework for WeChat. Furthermore, according to Deloitte LLP internal analysis released in April 2017, 52 of the Fortune 500 are testing or have deployed AR/VR products/solutions. 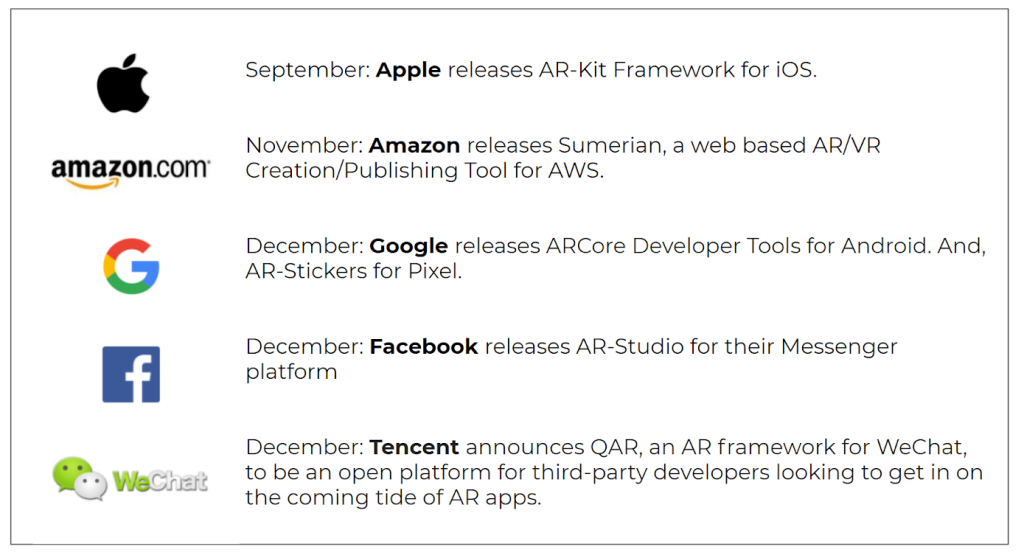 In addition to product launches, the industry has also seen a slew of acquisitions by giants like Apple, Google, and Microsoft. This activity is led by “fear of missing out”: These Fortune 500’s companies are investing billions to build and support industry catalyst like ARkit on iOS and ARCore on Android. Thanks to this push by major tech companies, mixed reality investment broke records last year as startups raised over $3 billion in 2017 (with over 50 percent invested in Q4 2017). And even more exciting, mixed reality startups raised nearly $750 million in Q1 of 2018 as momentum continues to roll!

The best part? Consumers are beginning to adopt, quietly, but with great engagement. For example, consumers using the Houzz app were 11 times more likely to purchase when engaged with their augmented reality features. And of course — Pokemon GO, an augmented reality app, became the fastest game ever to achieve $500 million of revenue. Snapchat users tally 500 years of playtime with augmented reality each day.

Outsized gains for inside investors

Investing in mixed reality startups is an ‘insiders game’, and insiders see the best deals first. The technology is difficult to vet, and great investments are hard to access, especially at the early stages. This means spending years to find the right deals at the right time, building domain expertise, and developing a deep network of co-investors, talent, and corporate customers to build your mixed reality portfolio requires proprietary insider access. This is why it is hard to start investing in mixed reality as an outsider, compared to other industries like crypto where 2017 saw over 120 new crypto investment funds. In comparison, only four new mixed reality funds were launched in 2017.

What makes for a good investment?

Apple is investing in mixed reality. So are Google, Amazon, and Facebook. Top Silicon Valley venture funds are also taking advantage of this massive platform shift which has the potential for outsized returns. But, from a funding perspective, many investment thesis have not worked over the past.

Even though mixed reality is potentially the most powerful technology of the next 50 years, there has been a slower-than-expected adoption timeline of headset hardware. Industry insiders from 2015 projected there would be tens of millions of headsets in the market by 2018, but as we approach half-way through 2018 there are still an estimated install base of only a few million headsets in the hands of consumers. Recent releases of Oculus Go from Facebook have potential to change this.

But for the time being investors who poured capital into mixed reality startups in 2015 are now agonizing as their portfolio struggles to reach consumers at scale. The lack of consumer adoption is not because the content lacks quality, and it is not because entrepreneurs approached the market with the incorrect marketing strategy, it is strictly because mixed reality startups are selling into a small install base. Imagine trying to create Instagram with only 10 million smartphones in the hands of consumers … it would be impossible to scale no matter the strategy.

One way founders can avoid these investor pitfalls is to create verticalized experiences that draw a lot of revenue from their customers and do not require widespread consumer adoption (i.e., mixed reality software for architecture visualization, or medical education, or collaborative telepresence).

To profit from this opportunity investors must first understand the state of the market. The release of AR for iOS and Android was so important for our industry because even though smartphone-AR is less powerful relative to headset based experiences, there is a large install base of smartphones in the hands of consumers and therefore great entrepreneurs have potential to scale to millions of daily active users. It’s important to ask yourself when analyzing a mixed reality consumer startup: “How can they reach 100 million users, is it even possible?” And if it isn’t, then how can revenue be generated from customers who don’t require scale? One can credibly argue in today’s current market landscape it is not possible to reach 100 million consumers in a headset, and therefore the best entrepreneurs are either leveraging the smartphone or selling into the enterprise.

How can you get involved in mixed reality investments?

Accredited investors must compete for outsized returns, and there are few opportunities in the world like mixed reality, but in order to avoid looking foolish investors should leverage the following tips and strategies to get involved in this revolution.

First, do not begin blindly investing into AR/VR. It is a complex technology with an ambiguous adoption timeline and it is easy to fall for ‘fluff’ products without access to industry expertise, corporate customer feedback, and network connections. The best ways to get involved are to either back a venture fund, or to join an AngelList syndicate. However, if you are not interesting in becoming a limited partner, you should focus on developing domain expertise and building a strong network in the industry. You can do this by attending investor and AR/VR tech conferences to learn the latest innovations in this field, subscribing to newsletters, and meeting founders and developers. You should expect to spend 6-24 months taking a deep dive into the mixed reality landscape before any success.

Mixed reality is the next frontier in enterprise and computing platforms. As companies like Apple, Google, and Facebook rush in to take advantage of this massive opportunity, investors with domain expertise and network will have access to deals which will yield outsized returns in the medium term. If you are interested in taking advantage of this once-in-a-lifetime investment opportunity and play a part in the growth of this new, immersive interface, it is the perfect time to begin investing into early stage funds to gain access to these deals at the earliest stage in their life-cycle.

Don Stein is an advisor and investor to leading mixed reality startups, manages the MR scout fund for General Catalyst, built the most financially backed MR syndicate on AngelList, and is a major component in the MR industry for helping founders meet the right investors

Paraj Mathur is an investment associate at Candela Partners, and recent graduate from Franklin & Marshall College majoring in Business and Computer Science.