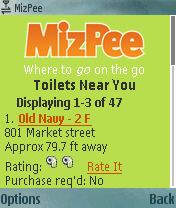 Mizpee, a location based mobile service that tells you where to find the nearest bathroom, is publicly launching today.

You visit the service on your mobile phone browser, and search for bathrooms by city and street address, then see a list of the nearest ones. It includes user-created rankings for how clean each bathroom is, as well as a note about any access fee. It also says whether or not a bathroom has a diaper-changing station, and whether its restricted to a premise’s customers. Once you’ve made it to the bathroom, Mizpee offers bathroom trivia to help you pass the time, such as which restrooms are the ‘best and worst’ in city you’re in. The company says a texting version is on its way.

Apparently a lot of people need this service, or are at least bemused by it. Built by San Francisco-based Yojo Mobile, the application launched as a beta in June and scored widespread although not necessarily flattering press coverage — it has received 1.4 million unique visits and nearly 100,000 unique users so far, the company says (though no word on how many real, offline “visits” this translates to).

Yojo’s database of bathrooms uses Yahoo’s location information, including mapping and driving directions. Yojo has compiled its own data about bathrooms and says it does the best job of telling you where to go, fast. Google, Yahoo, AOL, Microsoft and many startups, including WhatsOpen.com are working on their own more general location-based services, but don’t pinpoint bathrooms per se.

A UK rival, London Loos, is currently testing its own application, which lets you text “toilet” to find the nearest lav in London. The company reminds us of the size of the problem it is solving, claiming more than 10,000 gallons of urine are micturated on the streets of Westminster, a London borough, each year.

The company also offers a widget so you can search Mizpee for bathrooms while on another web site.