Mobcrush, a mobile livestreaming service, said its American audience has grown to more than 84 million unique viewers per month (UVPM) across its network, according to the May 2019 data from measurement firm Nielsen.

Mobcrush also announced an update to its overall aggregate reach, which now totals more than 2 billion fans and followers across all social platforms worldwide. The company additionally disclosed that its Go Live, Get Paid sponsorship platform has disbursed more than $5 million in ad sponsorship funds to esports players, teams and gaming-centric live streamers since the program’s inception in 2018.

“Entertainment has been really strong for us,” said Mike Wann, CEO of Mobcrush, in an interview with GamesBeat. “Another one is gaming franchises and game titles trying to reach new audiences. Gamers are savvy and use ad blockers. They only endorse brands they like. We line up well there.”

More than 20 esports teams have signed on with Mobcrush, where the Go Live, Get Paid sponsored platform connects streamers (with audiences of all sizes) to major consumer brands, including Universal Pictures, Fruit of the Loom and many more. These brands are utilizing the scale of Mobcrush to reach and engage with the company’s network gamers and influencers.

“We launched Go Live Get Paid last year, and since then, we paid over $5 million to game live streamers, esports team, and others,” Wann said.

When Ninja moved his nearly 50 million user audience from Twitch to Mixer, Mobcrush saw a nearly 40% rise in its restreams for Mixer, Wann said. 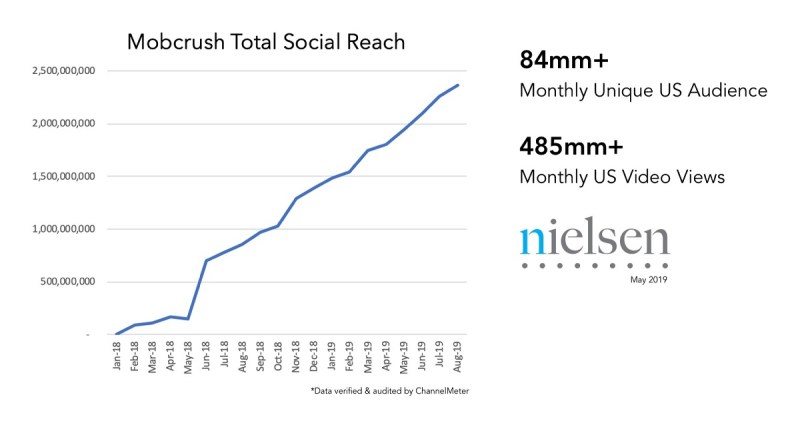 said Mike Wann, CEO of Mobcrush, in an interview with GamesBeat.

Mobcrush can broadcast its livestreams to just about any social media, and it can reach more than 2 billion people because users have multiple social media accounts where they follow a lot of the same folks. And that’s why, for the sake of accuracy in advertising numbers, it’s important to “deduplicate” those numbers. A survey in February showed that Mobcrush reached 160 million people in the U.S., or about 75 percent of the total U.S. gaming audience, based on an estimate from ThinkNow Research.

Mobcrush has more than 300,000 users who create videos on Mobcrush. Those social accounts on Mobcrush can publish simultaneously to a bunch of social platforms at the same time. (You can, for instance, use a Mobcrush livestreaming account to broadcast to Twitch and YouTube at the same time).

While the 84 million measured by Nielsen is smaller than the ThinkNow estimate, it’s still a big number. And that places Mobcrush at No. 33 in the U.S. on Nielsen’s list. For comparison, back in May, Spotify had 79 million users, Vice had 50 million, and ESPN had 46 billion, according to Nielsen. Fox has 85 million users.

“We’re about one third of YouTube with 230 million users,” Wann said. “Gaming media is now the mainstream. People talk as if it were niche media. If you look at gaming and esports centric media, we are No. 1 in the Nielsen top 100.”