Since mobile advertising began, marketers have wondered about its effectiveness.

After all, it’s a small screen, you’re on the go, and, until recently, connections were often spotty and slow.

A new report from San Francisco-based mobile intelligence firm NinthDecimal, released today, shows that mobile ads on smartphones and tablets are having a big effect — and its impact is growing. The study, based on data from Q2 to Q4 in 2014, measured only ads in iOS and Android apps, not ones in mobile web browsers.

VB Insight, VentureBeat’s research division, will hold an invite-only Mobile Advertising Roadshow in New York City on June 16 to showcase what brands are getting right or wrong.

The Mobile Audience Insights Report, the latest in a series from the San Francisco-based company, points in particular toward several potential game-changers for physical stores and for the future of mobile shopping.

The biggest takeaway, head of marketing Kimberly Breslin told me, is the 80 percent jump in physical store visits during the first day after a related ad was viewed.

This helps illuminate one of digital marketing’s blind spots: the connection between digital ads and real-world behavior. It’s also an area where NinthDecimal, which specializes in connecting online and offline data for campaign targeting, has more than a little skin in the game.

The company has developed a Location Conversion Index that it claims is the first measurement relating real-world behavior, like store visitations, to mobile engagement and ads.

But NinthDecimal said the report is objectively based on 1,535 randomly selected mobile users, plus billions of data points from client campaigns on its platform.

The report’s results show that the impact of mobile ads on physical stores differed by industry and distance. Mobile ads for retailers, for instance, have the best results in driving foot traffic when they were viewed two to five miles of that related store, 24 percent better than average traffic.

For consumer packaged goods (CPG) ads, the best distance was zero to two miles from a store, which saw a 13 percent boost over normal. Ads for quick-serve restaurants such as McDonald’s performed 18 percent better when seen five to 10 miles away from the restaurant, but, curiously, they underperformed when seen within two miles.

Besides the effect of mobile ads on driving foot traffic, the report also indicates that a common wisdom — people use larger screen desktop and laptop computers for making a purchase — may be changing.

Breslin noted that mobile is “having a bigger impact earlier in the product discovery,” with 54 percent of respondents saying they use their mobile devices to shop for products before arriving at a purchase decision, regardless of what means they employ to make the buy. This is an increase of nearly 60 percent over responses to the same question a year earlier. 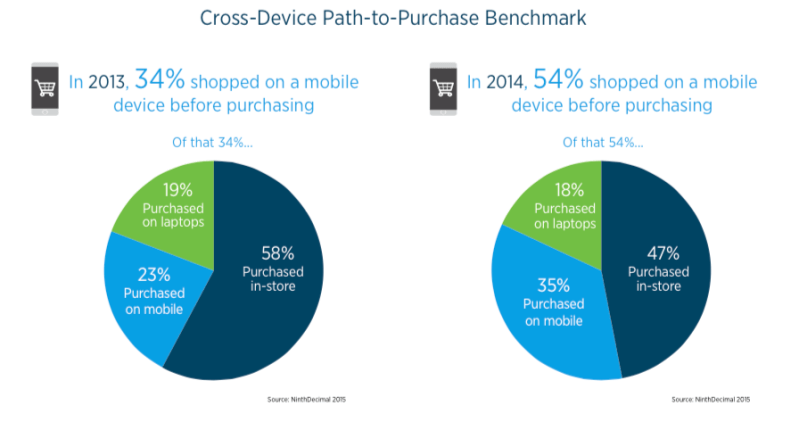 Above: NinthDecimal’s report shows an increasing use of mobile for shopping

And 35 percent of that 54 percent said they made their purchases directly on mobile devices, an increase of 12 percent over the previous year. Forty-seven percent still like buying in a physical store, but the trend is clear.

The report verified that in-app banner ads are on their way out, dropping by a third in the 12 months before Q4 2014, while rich media ads — including ones with video — increased 28 percent. (A recent report by Opera MediaWorks showed a similar increase in mobile video ads.)

As with the growing effectiveness of in-app ads for driving foot traffic and the increased popularity of mobile browsing and shopping, rich media ads are likely a reflection of a wider availability of high-speed mobile connections, larger screens, and an increasingly mobile-centric and media-aware market.

Mobile ad makers are getting better at their craft, enticing users with content and bonuses such that video completion rates — the percentage of users watching a video ad to its end — is up by nearly a third.

Fifty-seven percent of advertisers are now providing offers with their in-app ads, per the report. So it may be no surprise that users are spending 5.2 seconds longer on mobile ads than they did a year ago.