Cover, a mobile app that lets you pay your restaurant tab from your phone, wants to advance you cash for dinner tonight.

The company is rolling out a feature so that people who are dining with friends that already have Cover can benefit from the app before signing up.

Called Float, the tool enables people who have Cover to split the bill with a friend, even if that friend doesn’t have the app. So if you’re out to dinner with a friend and you want to pay for your portion of the bill with Cover, you open the app, indicate that you’re splitting the bill, and then enter the phone number of the person you’re dining with. Your friend will get an SMS text asking them to register; in the meantime, Cover will float the money for your friend’s dining experience. Your friend now has seven days to sign up for Cover and pay their share. They’ll get a reminder four days after dinner, if they still haven’t signed up. If they don’t pay by the seventh day, however, you are on the hook for the unpaid bill.

After that, it’s up to you to figure out how to get your friend to pay you back.

Cover cofounder Mark Egerman said the idea for Float came about because some users weren’t sure what to do when the other people they dined out with didn’t have Cover. They didn’t want to make their friends sign up for the service in the middle of dinner or have to fuss over how they’re going to pay at the end of the meal.

“You’re also in a restaurant. You shouldn’t be downloading an app onto your phone, you should be enjoying your meal,” said cofounder Mark Egerman.

Cover is designed to make splitting a bill between multiple parties at the end of the meal easy. Rather than turning dinner into a test of your math skills, the app divides up the bill among your group and allows you to add a tip.

Float is basically a sticky peer-to-peer onboarding process and a savvy way to get new users to discover the app. The company tested the new feature on several hundred people (roughly ten percent of its total user base in New York and San Francisco). According to Cover’s product lead Frank Harris, 94 percent of people who used Float later registered for Cover.

Fronting cash for your customers isn’t a totally new concept. This is how Venmo achieves its super-fast peer-to-peer transactions. Rather than waiting for the bank to send money through, Venmo facilitates instant money transfers with its own cash and then takes the bank transfer when it eventually comes through. Cover works in essentially the same way, but will never not get paid for the money it’s putting up. Either a new person registers and pays off their debt, or the friend who introduced them to Cover does. Either way, Cover isn’t losing any money. 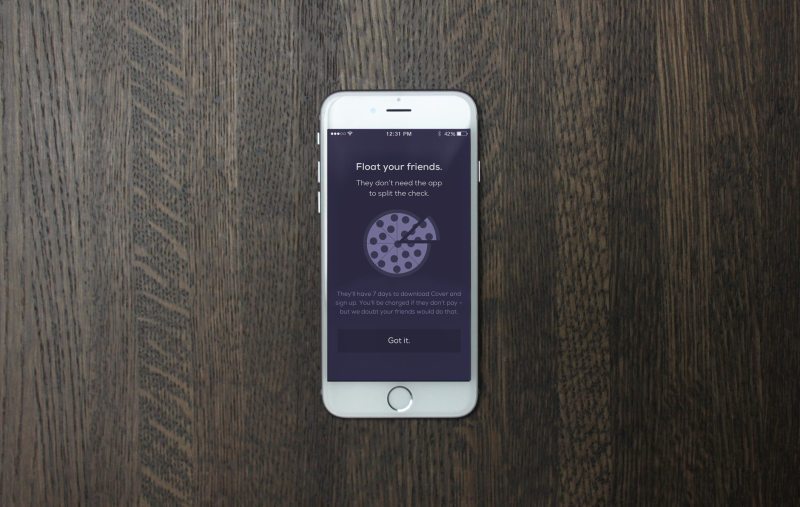 The company is able to put up the money to potential customers at least in part due to the $5.5 million in funding it took in the middle of last year.

Egerman is no stranger to the world of financial transactions. The cofounder, a Harvard Law graduate, is a former policy analyst for the Consumer Financial Protection Bureau — an agency that ensures financial products don’t take advantage of consumers.

Perhaps it’s this background that has allowed Cover to grow while other mobile dining apps have floundered. For instance, you won’t see Cover anywhere in Ameranth Wireless’ massive patent lawsuit over mobile payment technology. Meanwhile, Starbucks, Taco Bell, and the old Square Wallet are among the 51 products and companies that were hit with this ongoing lawsuit, the fees from which have certainly sidelined smaller mobile payment companies.