Mobile Legends: Bang Bang may not be a household name just yet in the U.S. But the Moonton-owned multiplayer online battle arena (MOBA) has exploded in Southeast Asia, and with the recent release of its 2.0 app update, social video views have boosted along with it.

According to video measurement company Tubular Labs, the game’s U.S. channel earned over 76 million cross-platform (Facebook, Instagram, Twitter, YouTube) views in October 2019. That’s a major month over month jump for MLBB (from about 56 million in September), and its best cross-platform performance in the last 12 months. It also placed them fourth among all gaming brands’ U.S. channels in October — passing up the likes of bigger names likes of Clash of Clans, Nintendo, Call of Duty and Apex Legends (among numerous others).

Each month, GamesBeat partners with Tubular Labs and CreatorIQ to provide a recap of the month’s most interesting social media trends in gaming.

Rolling out 61 different videos on the month, MLBB put a spotlight on character development, new game modes, additional features and highlighting gameplay. The approach isn’t necessarily unique (Overwatch, particularly, has profiled new characters in this way), but it’s an effective one that keeps users engaged and excited about the updated gameplay to come.

MLBB also encourages a growing community of influencers regularly publishing gameplay videos. In the U.S., Gosu General lays claim to being the top MLBB team in North America, and also generates the most views per month (12 million in October). Meanwhile, AdoboFlash is generating millions of views on a variety of games, including MLBB, Overwatch, Clash of Clans, etc.

According to CreatorIQ, an influencer platform that helps companies run brand ambassador campaigns with content creators, Gosu General has an engagement rate of 3.28% on YouTube, which CreatorIQ considers “good.”

Its subscriber base has marched upwards in the last six months, and monthly views have also been increasing in general.

AdoboFlash, on the other hand, may sport more subscribers on its YouTube channel, though its engagement rate is bit below Gosu General’s. The channel’s seen fluctuations in monthly views recently, although subscribers have slowly but surely been increasing. 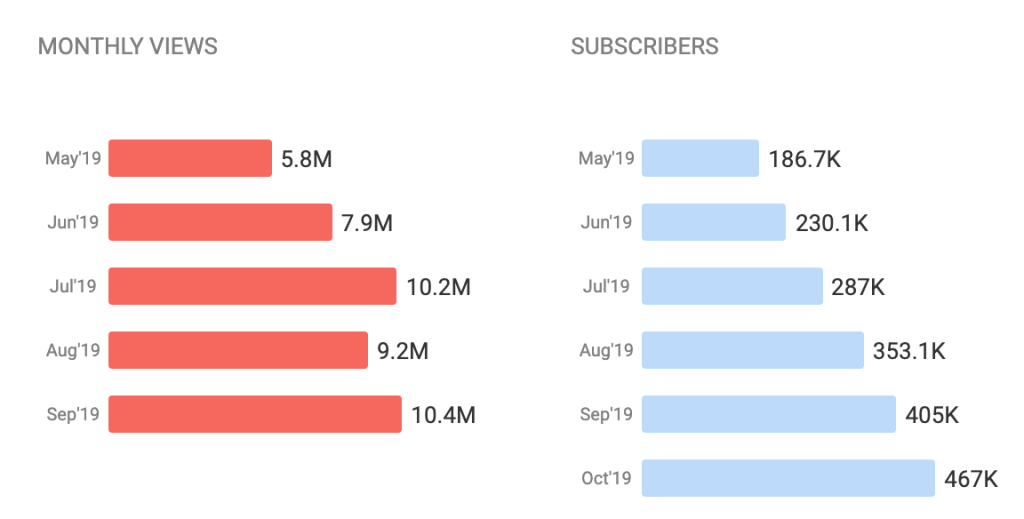 Those creators potentially have a long way to go to catch up to gaming’s biggest influencers, however. Jelly, FGTeeV and Markiplier are three U.S. gaming influencers that top the 100 million-view mark each month, with Jelly at over 238 million on its own. Jelly’s cashed in with sponsors like Gear.com this year, while FGTeeV has worked with Activision, Nintendo and Epic Games, and Markiplier’s been sponsored by Alien: Blackout.

In October, over 2,200 gaming videos have been sponsored on YouTube, Instagram and Facebook, with Apex Legends, Destiny and Activision (Deutschland) sponsored videos generating more views than any other brands’ sponsored gaming videos.

Digging further into October 2019 gaming videos, Fortnite’s Chapter 2 launch led the way with 40.8 million views. League of Legends’ “Phoenix” video received 29.2 million, and Fortnite’s blank screen earned 25.6 million. Showing the broad and enduring appeal of Fortnite, the game’s Spanish-language trailer around the launch picked up 17.5 million views — making it one of the 10 most popular global gaming videos on the month.