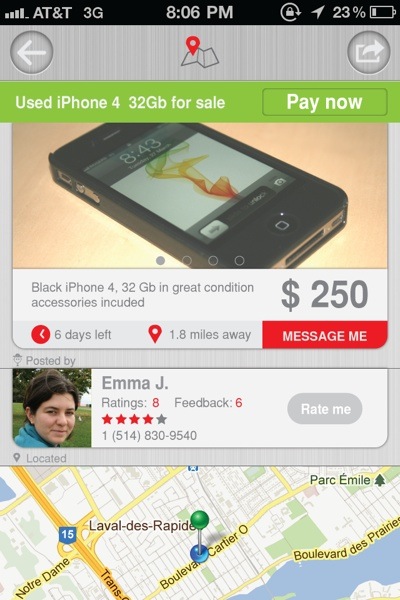 With online bulletin-board Craigslist seemingly ignoring mobile entirely, the race is on for someone to offer the first great mobile marketplace. One contender is Grabio, which initially started out as a consumer to consumer marketplace, but is now seeking out local businesses to flesh out its ecosystem.

Chicago-based Grabio launched version 3.0 of its app on the  iTunes Store yesterday, which now offers inventory from local businesses, user profiles, a more social commerce-network, and the ability to make payments from right within the app.

“From the beginning we had the concept that we wanted to make classifieds more social and transparent,” Grabio CEO Horatiu Boeriu said in an interview with VentureBeat. “We’re trying to fix what’s wrong with Craigslist, and not just trying to bring Craigslist to mobile.”

The free Grabio app works as you’d expect for a mobile marketplace. Once you open it up, you can see people and businesses that are selling things around you and list your own item for sale. With the new app, you can create a profile and follow other users, which helps to socialize the shopping experience.

Also new in Grabio 3.0 is an intriguing Wishlist feature, which allows Grabio to alert you when you’re near someone selling a specific item you’re looking for. Unlike Highlight and Foursquare’s Radar feature, Grabio doesn’t run location services in the background for the Wishlist, which saves precious battery life. Instead, Boeriu tells me that the company implemented an Apple API that tracks your location via cell tower. It’s not nearly as accurate as GPS, but the fact that it doesn’t kill your battery and can run when Grabio is completely closed seems like a worthy compromise.

Compared to Zaarly, Grabio’s well-funded competitor that caters mostly to buyers, Boeriu tells me that his app is focused on both buyers and sellers. The company has already formed partnerships with some small and medium-sized businesses to include their inventory in the Grabio app, but it’s actively seeking out more.

“Our value proposition to a business is simple: we bring foot traffic to your brick-and-mortar store at no cost,” Boeriu said in an email.

While Craigslist isn’t much of a threat to Grabio on the mobile front, other apps are hoping to seize the market. The shopping comparison app ShopSavvy, for example, just recently announced its mobile marketplace, Savvylistings. But with a slick design and fast iteration (the first Grabio app launched in August), Boeriu believes his small company can take on bigger and better-funded competitors.

So far, Grabio has $4.6 million worth of postings on its marketplace (though the company isn’t yet talking total users or other metrics). The company is working on Android and HTML5 web apps, the latter of which will work across any mobile device.

Grabio has been fully bootstrapped so far, but Boeriu tells me the company is now talking with angel investors and VCs about raising its first round.