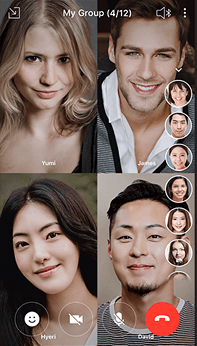 The new feature supports up to 200 people as part of a group chat, however, given the relatively restricted screen capacity of mobile phones, only four faces actually show up at any given time.

A subsidiary of South Korea’s biggest web operator, Naver Corp, Line grew to more than 220 million users through the popularity of its WhatsApp-style mobile messaging app, though the vast majority of those users are centralized in its four major markets — Japan, Taiwan, Thailand, and Indonesia. Five months after its dual IPO, Line has been pushing to expand its reach through a number of initiatives, including offering better support for PC-based users. As it struggles for mindshare in the West, however, it has been pushing into the business realm in its core existing markets.

Today’s launch comes nine months after Line introduced group voice call support for up to 200 people, and it was only a matter of time before a group video call feature was ushered into the mix. Google Hangouts and Skype have offered group video calls for a while, while Slack added the feature just yesterday. WhatsApp gained video calling last month, but only for one-to-one chats.

It goes without saying that 200 people is a lot for any call, let alone a group video call — it’s difficult to imagine many scenarios where you would have more than maybe a dozen participants. But, for better or worse, the option is now there for those who need it. The first four people to join the call will be the default videos that show, while everyone else will be displayed as a profile picture. If you’d rather see someone else in the video, simply drag their profile picture over to replace one that’s already there.