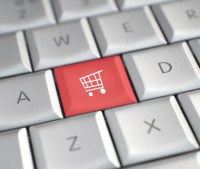 Consumers shopping from mobile devices over the holidays played a significant role in record online sales. But which retailers won these mobile shoppers over with the best experiences?

Consumers were most satisfied with the shopping experiences on Apple and Amazon mobile sites or apps, according to new data released by market research firm ForeSee.

ForeSee collected data on the top 40 U.S. retailers’ websites and was able to produce statistically reliable satisfaction scores — on a 100-point scale — for 16 of the retailers’ mobile experiences. The scores are based on responses from more than 3,000 visitors to apps and mobile sites. The average satisfaction across these sites was 76 out of 100. 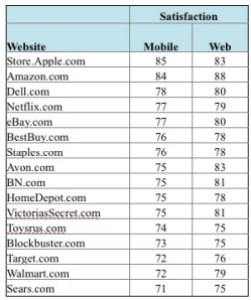 Apple placed first with a score of 85, and Amazon came in a close second with an 84 out 100 satisfaction score. eBay and Best Buy pulled in average scores of 77 and 76, respectively. Target, Walmart and Sears occupied the bottom rung with consumer mobile satisfaction grades teetering just above the D mark.

On the whole, consumers graded their mobile retail experiences as inferior to the experiences they have on the web.

The lesser-quality offering, however, isn’t preventing them from shopping via their mobile devices. Thirty-four percent of online shoppers used their cell phones to research products and 15 percent made a purchase directly from their device, according to ForeSee, which counts that purchase stat as an 11 percent jump from last year. The data backs up previous reports from eBay, PayPal (an eBay company) and Amazon, all of which talked up their holiday 2011 mobile sales.

But satisfaction does matter. Highly satisfied mobile shoppers said they were 54 percent more likely to consider the same company for a future similar purchase, according to the survey. They are also twice as likely to buy from the retailer’s mobile app or store again.

“The smartphone is a powerful shopping tool and a double-edged sword. Consumers will use it to research products and check a retailer’s own site while they’re in the store, but they’ll also use it to compare prices and check out the competition,” ForeSee president and CEO Larry Freed said. “The gap between mobile experience and web experience is an opportunity for retailers as much as it is a liability. We know consumer expectations will only continue to grow, and right now Amazon and Apple are setting a very high bar.”