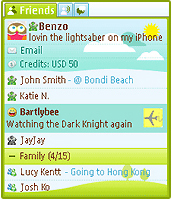 The Burlingame, Calif. company is less well known, at least in the United States, than social networking sites like Facebook and MySpace, or even mobile-specific social services like Loopt. But by targeting lower-end phones, the company has become quite popular internationally. Since January, mig33’s user numbers have doubled from 9 million to 18 million. (Back then, chief executive Steve Goh told us he wanted to make headway in the United States this year, but cofounder Mei Lin Ng acknowledged today that mig33 still hasn’t taken off here.)

The competition to offer these kinds of services to mobile users seems to be growing — iSkoot, for example, is building a similar platform for AT&T.

The overall goal, Ng said, is to increaes engagement and “stickiness”, which in turn will lead to more spending on mig33’s services and mobile content. Ng also noted that mig33 should be doubly-cushioned from the economic downturn — not only is it a mobile company (which is one market predicted to remain strong), its biggest users are in less developed countries, which have been less affected by the global crisis.

The company has raised $23.5 million in venture funding. It was also one of the top 10 mobile startups featured at our MobileBeat conference in July.