London-based HyperBees won the Get Discovered Android mobile game contest on Tuesday with a quiz game that will land the startup a funding deal.

The three-person team headed by Tom Mleko (pictured below, second from right) will receive a term sheet for a seed investment from Trinity Ventures. The amount could range from $50,000 to $100,000. Trinity Ventures sponsored the San Francisco-based contest along with Best Buy, Hooked Media, and VentureBeat (I was one of the judges). The contest monitored downloads for the games on the Android market (now called Google Play) during a one-month period.

The contest featured more than 152 games from 117 Android game developers — a sign that there’s no shortage of mobile game startups. Each of the finalists had some pretty serious traction for the games they entered. Trinity Ventures general partner Gus Tai said he wanted to create a contest that highlighted not just good games, but good companies that deserved funding. I wouldn’t be surprised if each one of these companies — which all shared some interesting traffic and monetization data — picked up new funding. 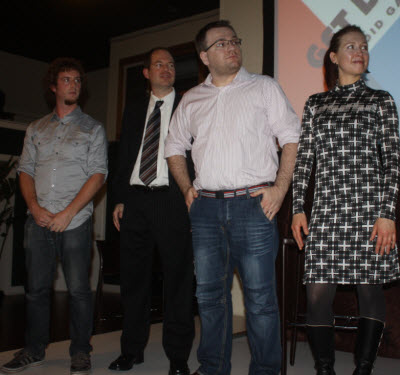 The finalists were chosen for the most part based on their traffic. They included Doodle Grub, by Pixowl, HyperQuiz by HyperBees, Big Sport Fishing Lite by RocketMind, and Parallel Kingdom by PerBlue. The top 10 games in the contest recorded more than 12.5 million game sessions. They received 350,000 recommendations and were played for 214,000 hours during the month.

Doodle Grub, a judges’ pick, is an arcade-oriented game inspired by Centipede and Doodle Jump. The game stars a little grub that crawls across the screen, depending on how you tilt it. You have to avoid predators and other obstacles.

Anya Shapina (pictured far right), a representative for Pixowl, based in Buenos Aires, said the company — headed by founder Arthur Madrid — generated more than 4.5 million downloads for the Doodle Grub game, which made it to No. 10 in the U.S. Android store. The company has 12 employees and is working on a sequel dubbed Greedy Grub. It has already raised $700,000 and is raising a new round.

HyperBees has just three people on staff, but the company has had more than 11 million downloads for its games. Its HyperQuiz game is kind of a “Who Wants a Millionaire for the mobile generation,” Mleko said.

The game led the competition in the number of Likes and ratio of Likes to Dislikes. It’s a Trivial Pursuit style game where you have to compete with three other real people in a 10-question trivia quiz. In each round, you win points if you are the first to answer a question correctly.

On average, users spend about 17 minutes per session. About 35 percent of the visits last more than 10 minutes. About 80 percent of the revenue comes in through in-app purchases and 20 percent is from ads. About 5.2 percent of users buy something, with the average purchase at $4.20. You can spend money in the game buying various aids that will help you compete, such as lifelines which are priced dynamically. Mleko said the team plans to take the game to new venues such as Facebook or Google+.

Joe Hanson, chief executive of RocketMind, said his two-person firm creates “mobile games for the masses” using simple concepts, motion controls, and play that is designed for groups. The company’s Big Sport Fishing Lite game is a simple fishing simulator, where you literally go through the motions of casting, tapping into your Android phone’s motion-sensor system. You throw your line out to fish and then reel it in by drawing circles on the touchscreen. The next game is dubbed Big Dino Fishing, and the company plans a variety of expansion packs.

So far, RocketMind has sold 70,000 copies of its paid version at $3.99. Banner ads have generated about 25 percent of the revenue. The company has a brand new game coming in the late summer.

PerBlue’s Parallel Kingdom is a two-dimensional cross-platform role-playing game that you can also play on the web. The location-based game has an animated map overlay on top of the real world. You can move your character around and fight with rivals to take over locations on the map. If you want to buy virtual goods such as food, you can pay real money ranging from $2.99 to $64.99.

So far, the game has a million registered users, 14,000 daily active users, and players stay in the game for two hours a day. About 85 percent of users are on Android and 15 percent are on iOS. Revenue is coming in at a rate of $200,000 a month, and 60 percent of it comes from players who have played more than six months. About 15 percent of users convert to paying, and the lifetime value of a customer is about $3.25.

PerBlue, based in Madison, Wisc., already has 35 employees, said Forrest Woolworth (pictured far left), brand director. The company started three years ago as a student-run development house and has focused on creating location-based games. Next week, the company is launching a new title, Parallel Mafia, as another location-based title using the same platform.

The winners were selected in part based on metrics from Hooked Media’s discovery platform. The contest time ran from Feb. 1 to March 3. In addition to myself, the judges were Tai, Bradley Horowitz (vice president of Google+), and Prita Uppal, chief executive of Hooked Media. Best Buy will provide distribution for HyperQuiz in its App Discovery Center.

[Disclosure: VentureBeat benefited from advertising for the event. The winner will receive promotional help from VentureBeat.]