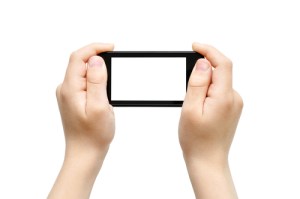 Mobile apps continue to be one of the richest areas for startups. Case in point: The four companies collected here, each of which made an appearance onstage today at the Demo Fall 2011 conference in Silicon Valley. We’ve noticed a focus on discovery in mobile apps, as well as tools for reaching the student populations of the world.

uTemporis helps you search for and prioritize fun events, movies, workshops, conferences and more. The app identifies events you have time for, as well as any that adhere to your interests, location and time available. The company uses your calendar’s API to connect and acts as a filter to your searches. It then shows you events based on your schedule.

But finding events is a crowded competitor landscape. There are household names like Yelp, Where and Yahoo Happenings, which all are locally based and show you any results, regardless of time. There are some cases where you may be willing to reschedule engagements for an event, which is where schedule-oriented search results may hit a snag. 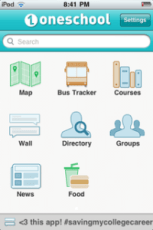 uTemporis was founded in 2010 and is located in San Diego, Calif. The company has been self-funded and has raised around $75,000.

Campuses are sprawling, and to a freshman’s eyes, all those imposing buildings can look intimidating. OneSchool shrinks that new campus onto your smartphone screen. The app contains a map of the campus, available courses, groups available on campus, university news, food in the area and a wall where students can chat freely.

The app feels very similar, if not exactly like, Facebook’s mobile application — right down to the Wall icon. Aside from the wall feature, the app is a bit static and seems like it won’t be of much use past the end of Welcome Week. 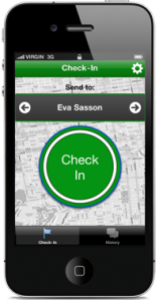 Tapps by TappMob, which was officially accepted into the Apple App Store yesterday, allows anyone to check-in with one tap to a chosen group of people. The company was founded by two collegians who felt their classmates need a way to quickly check-in with mom and dad, without interrupting their days.

But “one touch” and “check-in” have become mobile buzz words, and TappMob sees the need to (as LinkedIn founder Reid Hoffman said at the Demo conference yesterday) break out of the noise. To set itself apart, TappMob is taking its multi-use interface and allowing students to apply it to their own use cases.

TappMob was founded this year by Eva Sasson and Justin Mardjuki.

One of the first questions people ask when they open a shiny new smartphone box is, “What are the best apps?” The lack of app discovery is a developer bane, which the Peek app from Orange Silicon Valley wants to solve. It is doing this by allowing people to tag apps, which can then be searched through Peek App’s search engine. The engine can be white labeled as well.

The company goes up against names like GetJar that have already established themselves in the developer-focused app discovery space.

These are four of 80 companies chosen by VentureBeat to launch at the DEMO Fall 2011 event taking place this week in Silicon Valley. After our selection, the companies pay a fee to present. The Student Alpha Pitch companies are given a scholarship to present. Our coverage of them remains objective.