So why are we holding our MobileBeat conference tomorrow?

Focused on investors and entrepreneurs (developers), we’re asking the big question: Is now the time to go mobile? And if the answer is yes, what do you have to keep in mind?

As part of the answer, we should take a look at which companies have succeeded so far. What are the biggest hits, from an investor’s perspective?

The answer: Over the past decade, most money has been made on investments in companies building the back-end infrastructure of the wireless networks, but even here the returns have been mixed. An almost negligible sum, meanwhile, has been made from investing in mobile applications that run on phones. With the rise of the mobile browser (think 3G iPhone), however, and better networks to allow quick browsing, people are likely to surf the mobile web more. Open platforms are helping people find a way around the stagnant operators, too. That’s what suggests the types of success we see in the future might change.

To be sure, the iPhone 3G has raised the hype decibels — and it’s just not certain how investors will fare by investing in applications. We’ve got a venture capitalist panel starting at 11am where we’ll chew through these questions, how things like GPS are changing the game, and how apps (if they can become platforms) may become huge hits. We’ve got leading investors, such as Rick Segal from the Blackberry Partners Fund, Richard Wong, from Accel, Shawn Carolan, of Menlo Ventures — and even Rupert Young, of AT&T, who says the company has made few investments so far, but that’s about to change.

So, beyond the iPhone 3G hype, where has the cold hard cash been made?

First, we looked at the top 10 IPOs from 2000-2008 (source: VentureOne). The reality: Only 10 companies went public. Industry watchers will also note that Vonage Telecommunications, one of the companies on the list, had a disastrous enough IPO that shareholders revolted with a class action lawsuit.

Notably, half of the 10 did their IPOs in early 2000 during the Internet boom. After a nearly four-year nuclear winter, Atheros Communications got through the gates and raised $126MM in 2004 with its IPO. Only four of the 10 had billion dollar values at time of going public.

There are few household names on this list, unless of course you’re a fan of the cheesy MetroPCS and Vonage commercials.

A more diverse and interesting picture emerges once we focus on the top acquisitions in the 2000-2008 period (source: VentureOne). While no wireless communications equipment company had IPOs, almost half the acquisition dollars were spent on such equipment manufacturers. Navini Networks, a wireless broadband manufacturer is one example; it was sold to Cisco Systems for $330 million dollars in December 2007.

The most eye-opening trend is the emergence of Nokia as the biggest investor over the last 18 months. The phone giant has bought Trolltech, Navteq and Enpocket. Missing from the list (I don’t know why), are Nokia’s recent acquisition of Plazes, a location technology company, operating system platform, Symbian, this year, and Germany’s Gate5, in 2006.

We’ve pasted the entire list of acquisitions below (provided by Thomson and the National Venture Capital Association). Note how only one company reached an acquisition price of $500 million: Danger, bought by Microsoft in April. Danger is an example of the “device-platform” trend we referred to earlier this week. Apple and RIM have shown how much value there is in such platforms, if you manage your partnerships correctly.

In fact, RIM, which has grown organically over the years, is probably the biggest success of a mobile company around. It is valued at $64 billion. It fell outside of the data table below, because it was never acquired. Another device-platform company, Good Technology, was sold to Motorola, however that company was a classic case of not appreciating the importance of carrier relationships (investors tell us they could never get management to take the issue seriously). It abandoned its device, and focused on messaging, retrospectively perhaps a mistake. See the chart below for breakdown of investments in the mobile industry, according to segment.

A few other large acquisitions aren’t included in the list below (not sure why, perhaps because NVCA didn’t consider them venture deals) but are worth mentioning: Qualcomm bought Flarion in 2005 for a little more than $800 million. Flarion is considered a 4G technology (OFDM). Investors included Cisco, T-Mobile, Bessemer, SunBridge partners, Nassau Capital, Pequot Capital and NVP and SK Telecom. It had raised at least $45 million. Qualcomm also acquired Snaptrack, a San Jose, Calif. wireless positioning (GPS) technology in 2000 for $1 billion. It had patents, which were attractive to Qualcomm’s patent strategy. By the way, this was at the very height of the bubble. Snaptrack was run by Steve Poizner and backed by TI Ventures, owned by Texas Instruments and H&Q.

Also missing is Vodafone’s acquisition of mobile social network Zyb. Except for Symbian, these were relatively small acquisitions, however.

Here are a few of the other big exits worth mentioning: 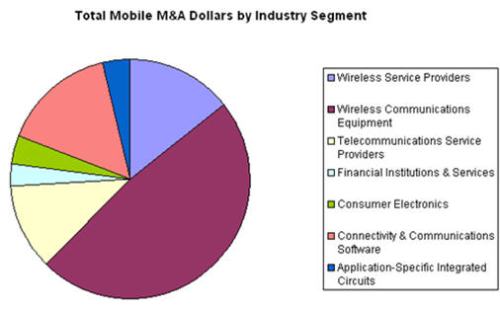 Finally, what kinds of companies within the mobile space are venture capitalists investing in? Here is a chart on wireless related financing trends provided to us by Rutberg and Co. 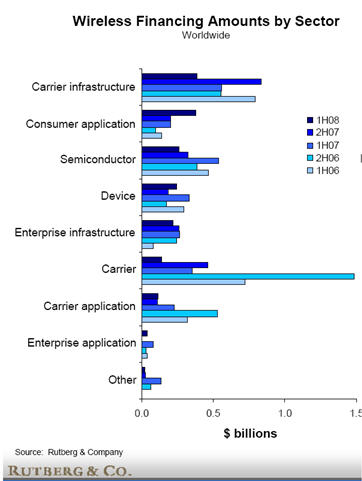 In the graph above, “carrier application” refers to companies that are based around selling their service “on deck” — that is, directly available on the carriers’ devices. JumpTap (mobile search and advertising) and Loopt (mobile social networking) are examples of on deck carrier applications. Companies bucketed under “carrier” are usually mobile network operators (MVNOs) such as kid-focused carrier Kajeet. “Consumer applications” are offered direct to wireless consumers without carrier intervention. MeetMoi, a mobile dating service we referred to as “Twitter for sex” and Qik, which recently launched a public beta are examples of the same.

Few of these companies have real revenue. Companies selling ringtones and wallpaper, such as Playphone, Thumbplay and ad network companies such as Admob are examples.

Look at the carrier and carrier application bars above: Capital influx into these companies has dropped precipitously between 2006 and 2008. Some of these developments have played out prominently in the news as MVNOs like Helio have run into serious headwinds while others such as ESPN Mobile have been forced to exit the business altogether. By the same token, VC money is increasingly pouring into direct consumer applications. While this isn’t necessarily a sign of a weakening of the carrier choke-hold, it certainly tells us that VCs are increasingly funding pure consumer wireless plays that completely bypass carriers.

All in all, the data tells us that while most of the previous exits have been hardware companies and services providers, VCs are betting the future on applications that serve the consumer directly. Will we ever see the mobile version of Google or Amazon, products that enjoy widespread usage and strong mindshare? Come to MobileBeat and find out for yourself.