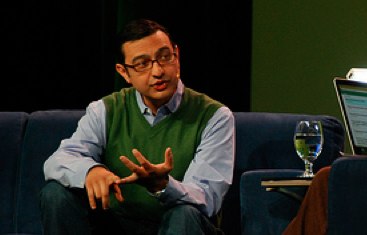 In case you haven’t heard yet, Google has just surprised the business world by announcing a new operating system called Chrome OS, designed to kill what Google thinks is an outmoded but dominant operating system: Windows.

Google’s Chrome OS is bound to spark significant debate at MobileBeat2009, our mobile industry conference next week (July 16) in San Francisco. At 8:45am, I’ll be opening with a fireside chat that includes Google Vice President of Engineering Vic Gundotra (pictured left). Gundotra has become perhaps the most articulate Google spokesman on the future of the operating system. He recently declared the Web “has won,” in other words, it’s now more efficient to do your computing tasks from a Web-based operating system, such as Chrome OS, than one that rests of your desktop, such as Microsoft’s Windows. That’s because a Web-based OS gives you direct access to the Web, and so it can be more dynamic and flexible, or so the argument goes.

To be sure, we just checked in with Google, and they’re saying that aside from their announcement blog post last night, they’re not saying too much more about the Chrome OS. But the new OS is going to be the elephant in the room regardless, so I’ll do my best to get Gundotra talking.

Chrome OS will also likely stir things up on other panels, specifically on the one entitled “New Devices,” which runs 11am to noon. That’s where we’ll discuss the emerging craze around netbooks and other devices (the Amazon Kindle, etc). All of these new devices are seeking ways to differentiate themselves — with manufacturers seeking to bundle in different sorts of software. The “personal cloud” has become a major theme, where netbook manufacturers begin to let you store all your data on the cloud in special data plans that come as part of your package. In that discussion, we’ll be hearing from major players, such as Jason Lim from Microsoft’s mobile division (below right, seen speaking in February on a panel in Barcelona); Keith Kressin of Qualcomm, the industry’s largest wireless supplier; Michael Rayfield of Nvidia, the graphic chip maker, and Donald Pitt of Samsung, who will explain how the world’s largest conglomerate plans to deliver new devices. 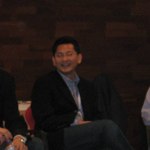 Of course, with Google now pushing its Chrome OS, to be unveiled later this year, and to be available to run in devices next year, device makers may now scramble to adopt Chrome OS for their netbooks, seeing it as the most flexible operating system to offer these services. After all, they’re already scrambling to embed Google’s other operating system, Android, into their smartphones.

Indeed, Google says its Chrome OS is first intended to run on netbooks, the hot-selling devices that are smaller than laptops. However, eventually Google wants it also to run on larger devices such as full-blown PCs. For the time being, Google appears to prefer that Chrome OS, rather than Android, its existing OS for mobile devices, run on netbooks. (Last year, VentureBeat first demonstrated that Android was flexbile enough to be used on netbooks. This led to a series of pieces about how Android could run on all kinds of devices, not just high-end mobile phones for which is what Google was primarily marketing Android.) However, Google was always curiously quiet on that front, and now we know why: It never intended to push Android beyond the smartphone. In fact, Google says competition between the two systems will help to drive innovation.

Also speaking on the morning MobileBeat2009 fireside chat (entitled “The Recipe for a Winning Mobile Platform”) will be Nokia board member Tero Ojanpera, who runs Nokia’s application store, Ovi. Nokia, which has dominated the mobile phone market for years, is under incredible pressure to respond to the proliferation of cool smartphones running on more flexible operating systems, such as Google’s Android. Also speaking at the fireside chat will be Michael Abbott, senior vice president of application services and devices for Palm — the first time a Palm executive has spoken since the launch of the Pre. 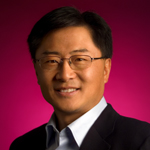 Next, we’ll have Google executive Eric Chu, who is responsible for driving the application ecosystem for phones operating on Google’s Android. Chu leads Android developer initiatives, and communications with partners Open Handset Alliance. He’ll likely be able to shed more light on how Google plans to market Chrome OS differently from Android. He’ll be speaking at 4:30pm to 5:15pm on the panel entitled “What will the gatekeepers do now?: The App store and beyond.” He’ll be joined by Venetia Espinoza, of T-Mobile, the carrier that has so far been the biggest supporter of Android.

Among other things, we’ll be talking about the growing tension between Google and Apple, as Google pushes a web-oriented mobile industry, and Apple seeks to protect its control over an embedded application-centric world. The list of areas where Google and Apple compete just keeps getting longer: Apple’s iPhone vs. Google’s Android, Apple’s Safari browser vs. Google’s Chrome, Apple laptops vs. Android netbooks, and now, Apple’s operating system vs. Chrome OS.

The rest of the day will be rounded out with speakers from the entire mobile ecosystem. We’ll have all the world’s major carriers represented (the four big U.S carriers, AT&T, Verizon, T-Mobile and Verizon, as well as the two biggest international carriers, Vodafone and ChinaMobile). We’ll also have the top operating system vendors, device makers, investors, mobile advertising companies and agencies, and content players speaking. More information here. Go here for your ticket. We’re capping this at 400 attendees, and remaining tickets are selling very fast.

Finally, we’re really thankful for the sponsorship support from so many mobile industry leaders, for making this all possible: Qualcomm, Velti, AdMob, GetJar, Symbian, beamME, Sun Microsystems, Greystripe, Mozes, Nvidia and SGN. We’ve got an amazing lineup of new startups planning to launch in the startup competition, and a reception planned with a live band featuring Latin jazz from Michael Cerda’s group. Cerda runs CC:Betty, and we’re also expecting Betty to be walking around, if not getting down to the music :)