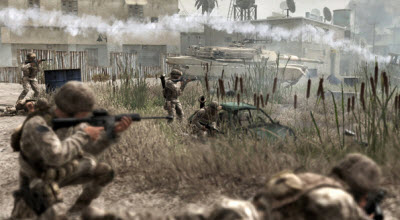 Call of Duty: Modern Warfare 2 has set the all-time entertainment industry record, generating $550 million in sales in its first five days on the market.

That number means it has beaten all other video game launches as well as generated more revenue in its first five days than any movie. It has done that in spite of, or because of, a controversial scene in the game where a player can choose to mow down civilians in a terrorist attack on an airport.

It was so controversial that the media reported that the game was banned in Russia, but the game’s publisher said that wasn’t true and that it deleted the scene from the PC version of the game in Russia and chose not to sell console versions there.

By comparison, the worldwide box office five-day worldwide record set by Harry Potter and the Half-Blood Prince film was $394 million. The opening revenues for The Dark Knight film was $203.8 million. The largest video game sales was held by Grand Theft Auto IV, which sold 6 million units and generated $500 million in its first five days.

That’s where the real danger of this game lies for the rest of the game industry. Players may breeze through the single-player campaign, which I finished playing last night, in a mere eight hours. But they may play multiplayer matches for months. In that sense, the game could occupy the time of hardcore gamers and suck out a lot of the oxygen from the rest of game sales. The single player experience was very cool, but I’m very much excited about playing multiplayer matches in the coming days.

Now the question is just how long Modern Warfare 2’s streak is going to last for its publisher, Activision Blizzard. The Santa Monica, Calif.-based company itself said it remained cautious about the global economy’s effect on its business and consumer spending overall.

“In just five days of sell through, Call of Duty: Modern Warfare 2 has become the largest entertainment launch in history and a pop culture phenomenon,” said Robert Kotick, chief executive of Activision Blizzard, in a statement. “The title’s success redefines entertainment as millions of consumers have chosen to play Modern Warfare 2 at unprecedented levels rather than engage in other forms of media.”