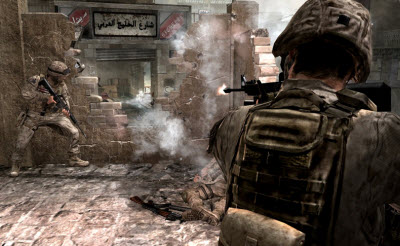 Call of Duty: Modern Warfare 2 got more than eight million online gamers in its first five days after sales began on Nov. 10.

That’s another record broken for the first-person modern combat game, and Activision Blizzard says that those gamers constitute the largest army in the world. In fact, that virtual army is bigger than the top five real armies in the world combined. NATO’s 28-member countries have more than 3.9 million active troops, while the People’s Liberation Army of China has 2.3 million.

You get the point. These statistics are starting to get downright silly, but it’s true that the success of Modern Warfare 2 is pretty amazing. If you haven’t heard about it, you’ve been hiding in a hole. I am one of these online gamers, and last night I managed to perform an unparalleled feat in my combat career. I came out on top in a Team Deathmatch, with 16 kills and only four deaths. Normally, it’s the other way around for me. I am now a Master Sergeant, ranked at 23 out of 70 possible ranks.

Why do I keep playing? The multiplayer combat on this game on Xbox Live is the best I’ve seen. The action is fast, realistic, and non-stop. But the rewards keep me coming back. The game has rewards for just about everything, even if you wind up being the worst player in the match. You can get rewards for the longest death streak, for instance. And if you get the longest kill streak, you get a chance to bring in a helicopter gunship or a Predator drone’s missile to wreak havoc on your online rivals. It’s also fun to brag about your stats, like I just did.

The company said it sold $550 million worth of the games in its first five days. So before you think about disrespecting the game, think about all of the grief you’ll get from online gamers. I look forward to the “less filling, tastes great” discussions that will happen next year when Electronic Arts launches its rival game, the next Medal of Honor.