MOG, a social networking and blog site for music lovers, is going through some cosmetic changes. Today’s relaunch is designed to leverage a new organizational structure, homepage widgets, and the site’s own editorial staff to transform MOG into a ‘Huffington Post’-like destination for music news.

To date, the bulk of MOG’s following stems from its wealth of music-related blogs. By offering users a free blogging platform and forging syndication agreements with over 300 popular music blogs, the site is currently seeded with over 5,000 music-related posts a week. Along with its blog content, MOG offers dedicated pages for every artist, album, and track featured on its site. Holding all of this together is MOG’s media player plugin, which analyzes users’ listening habits (via PC or MP3 player activity), broadcasting them to other MOG users via its basic social networking interface.

MOG’s setup is simple — like competitors Last.fm and MySpace Music, it offers a mix of social networking and music news. And, like a number of other sites that rely on user-generated content, MOG’s lifeblood is its ad network. However, despite its lineup of features and traffic/revenue (the company averages 5.7 million monthly unique visitors and expects to clear $5 million in revenue in 2009), the site’s homepage has been an organizational train wreck.

At the center of this relaunch is a slew of new widgets and a fresh heaping of editorial direction from MOG’s in-house staff. The biggest example at work is the site’s new “Daily Music News” widget, which MOG editors seed with the biggest music stories of the day. In addition to feature stories from major music news outlets, MOG’s editors now scour the site’s blog network around the clock for accompanying user-generated content. This new addition ensures that when a user clicks through to a story featured in the widget, they are also offered a relevant series of posts from MOG users. Previously, the site had virtually no topical relevance in its feeds, instead offering a chronological stream of the site’s most recent posts. 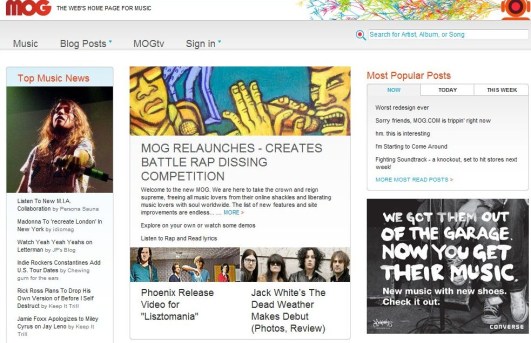 Though the Daily Music News widget stays at the top of the site, users are free to tweak the site’s additional 24 widgets to their liking. Widgets devoted to artists’ upcoming shows, music recommendations, and MOG’s most popular artists are regularly updated by MOG’s editors, and can be organized and/or removed to a user’s liking. Within this wealth of content and widgets, MOG has also launched a Digg-like voting system for user-generated content, and an algorithm-based system for shifting popular trending topics to the top of users’ feeds.

Improvements like these are likely to be a boon for MOG’s traffic, but that doesn’t mean the site is out of the proverbial woods. On one hand, it’s smart (and cost effective) for MOG to revamp the organization of its user-generated content. Giving users control over the site’s flood of content is likely to produce a better user experience, which is the first step to creating a destination. However, MOG still has some ground to cover on the music streaming front. It’s no secret that the site is working on a music streaming service, but with giants like CBS-owned Last.fm and News Corp-backed MySpace Music already offering music blog, news, recommendation, and streaming services (with partnerships more music labels, no less), it’s clear that MOG has a long way to go before rules the roost.