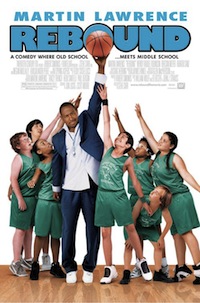 Three months ago, things were looking up for startups seeking venture capital. Now it seems that optimism was misplaced, according to the latest Moneytree Report from Pricewaterhouse Coopers and the National Venture Capital Association.

Venture funding has followed an unsteady path to recovery since the economy collapsed at the end of 2008. Venture rounds plummeted at the beginning of 2009, and though they’ve been climbing since then, the climb hasn’t been consistent. Investments fell in the first quarter of 2010, rose dramatically in Q2, and now they’ve fallen again.

In a conference call discussing the numbers, Flybridge Capital Partners’ Michael Greeley suggested that Q2 may have been an “anomaly” and that the lower investment levels seen in Q1 and Q3 may be the new normal.

“Firms that are active are seeing quite healthy deal flow,” Greeley said, but the industry is consolidating and the number of active firms is falling.

Much of the unpredictability in venture capital can probably be attributed to cleantech. Since venture investment in the cleantech sector tends to be dominated by a few big deals, the amount invested varies widely from quarter to quarter. In Q3, cleantech investment declined 59 percent, to $625 million, from $1.5 billion in the previous quarter.

The report was compiled using data from Thomson Reuters. 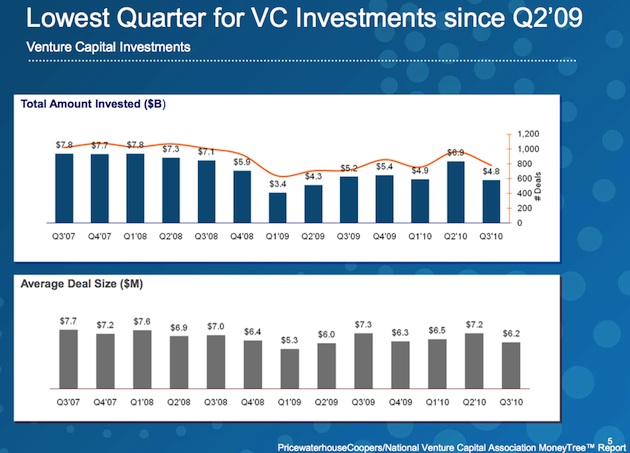 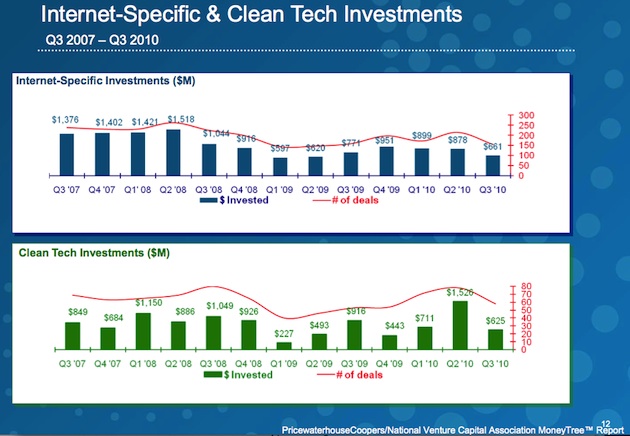