Monster has snapped up job search startup Jobr, as the global recruitment giant looks to double down on its mobile recruitment ambitions. Terms of the deal were not disclosed.

Founded out of San Francisco in 2014, Jobr had already raised $2 million for its Tinder-like approach to finding jobs, with users swiping right on positions they may be interested in, and left for ones they’re not. And for recruiters, Jobr offers a range of tools to help them connect and interact with applicants. Now Monster is looking to target the “next generation of job seekers” by taking Jobr under its wing and helping it build more mobile-focused products, as well as integrating its own smarts into the existing Jobr service. 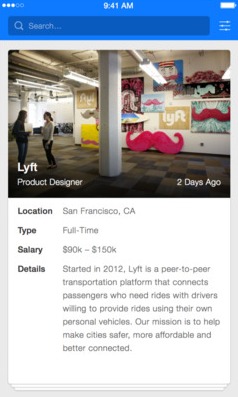 Monster is no stranger to acquiring complementary or competing services, having previously bought Yahoo Hotjobs for $225 million. And it recently brought on board recruitment startups TalentBin And Gozaik.

That Jobr has “exited” just a couple of years after launching is perhaps indicative of the fiercely competitive landscape in which it operates, with the likes of CareerBuilder, Craigslist, Monster, and a host of other emerging startups all vying for the same market. But it’s also part of a trend of big companies looking to younger upstarts for innovation, something that is often difficult to achieve within larger corporations.

“In just a few short years, Jobr has built a simple and consumer-friendly, mobile-first approach to connecting jobs and people,” said Mark Stoever, president and chief operating officer at Monster. “Bringing the Jobr app and team to Monster will enhance our leading global talent platform for job search, people search, and related solutions across mobile channels.”

As it happens, Monster already featured jobs within the Jobr app, but following the acquisition, it will begin to integrate the app directly with Monster’s own recruitment platform. The company said it will also focus on building out the Jobr app with new features. Moreover, given that Jobr currently only operates in the U.S., Monster added that it will be looking to introduce Jobr to new markets from early 2017.

But perhaps most tellingly, Monster is quite specific about refocusing its efforts on mobile, adding that it intends to “unleash the Jobr team and core assets in further expanding its mobile capabilities, accelerating the development of the mobile components of the company’s recruiting platform.”

The fact that Monster is looking to tap into the smartphone-toting job-hunting generation should come as little surprise. Facebook recently revealed that 54 percent of its 1.65 billion users only ever access the service on mobile, while professional social network LinkedIn recently rolled out a new mobile-only service to help college graduates find jobs. Other fledgling startups too are arriving on the scene, with mobile-only Job Today recently raising $10 million to help people find a job within 24 hours.

Put simply, the future’s mobile. But then, you knew that already, right?