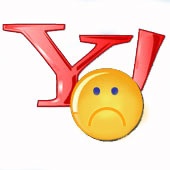 Yahoo reported that revenue and profit fell during the first quarter — the first full quarter under new chief executive Carol Bartz. In response, the company plans to trim its workforce again, this time by 5 percent to cut down on expenses.

The search giant’s net income for the first three months was $118 million, down $542 million from last year at this time, representing a 78 percent decline. If you subtract the $401 boost it got from an investment in a Chinese peer company, its profits still dropped by 16 percent — not a small figure by any means. Yahoo pegged its revenues for the quarter at $1.58 billion, down from $1.8 billion last year, a 13 percent drop. This data is pretty much what analysts had anticipated, but is still disappointing news for the company, which continues to struggle against its more formidable rivals, namely Google, which reported 10 percent growth in earnings last week.

To further lighten its load, Yahoo predicts that it will cut 680 jobs out of its workforce of 13,600. This will bring its layoff count in the last two years to over 3,000 employees. Taking it one step further, the company is even considering selling off some of its more central assets — like Yahoo HotJobs, Yahoo Personals, and several others that haven’t been performing as well as anticipated. There are also rumors that it will shed some of its Asian properties, like its 10 percent stake in Korean e-commerce company Gmarket.

While the company’s display ad business continues to spiral downward (a common problem for its competitors as well), analysts say its core search business has stabilized, perhaps making it more appealing once again to Microsoft. Whether Bartz will pursue this option aggressively remains to be seen.

For now, Bartz seems to be clinging tight to her fierce optimism, going as far as to call Yahoo “immune to the ongoing economic downturn.” Her prescription for the future: prudent cost management — which, at this juncture, seems to mean throwing as much as possible overboard to keep the ship afloat.