Microsoft today revealed that it now has “over 9.2 million” Office 365 Home and Personal subscribers — that’s a more than 30 percent jump from the 7 million subscribers it had back in October.

Microsoft first launched its Office subscription service back in January 29, 2013. The service grew steadily in 2014, and is now coming up on its third year of existence.

Here’s a closer look at Microsoft’s steadily increasing subscriber growth over the past five quarters: 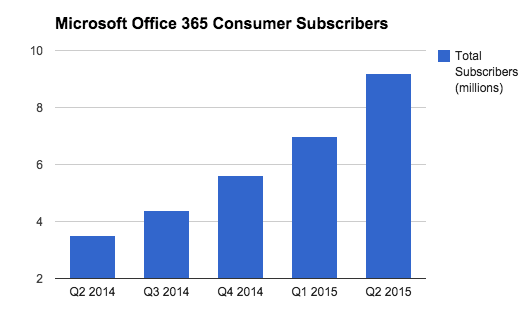 The stats include both Office 365 “Home” and “Personal” subscribers. These services cost between $6.99 and $9.99 per month — a noteworthy price when compared to Google’s free Drive offerings.

Microsoft shared the news above within its (fiscal) second quarter 2015 earnings report, which you can read about here. And in other news, Microsoft’s Surface is now a billion-dollar business.