From a distance, you could mistake the Moto 360 for any other chunky men’s watch. But once its 1.56-inch screen lights up with a notification of a new email, a Twitter mention, or an upcoming event, it’s obvious to all onlookers that this Motorola timepiece doesn’t just tell time.

Like other Android Wear watches, the $250 Moto 360 serves as a selective external display for a Bluetooth-linked smartphone running Android 4.3 or newer versions. Wear this, and your odds of missing a new notification or a Google Now update drop to near zero: The watch vibrates, and its screen displays a banner for each new item, and in most cases you can act on it with swipes of its touchscreen.

The 360 also provides a limited amount of remote control via voice input. Say “OK Google” and the watch — assuming it hears you correctly, which was not assured in my experience — will then invite you to say your Google search query, ask for directions, check your schedule, or tell it to do such simple actions as setting a timer or an alarm.

You can also dictate replies to texts or e-mails — but the exceedingly short time you have to correct any mistakes invites “damn you autocorrect” mishaps.

And even when disconnected from a phone, the 360 counts your footsteps, can measure your heart rate and, yup, indicate the current time. Motorola also threw in an app that checks to see if you’ve gotten the recommended 30 minutes of moderately cardio-intensive activity.

But where earlier Android Wear models like the Samsung Gear Live and LG G Watch I tested earlier this summer have featured square displays that leave no doubt you’ve shackled a tiny computer to your wrist, the 360’s nearly round display fits with other watches. Its leather band is also far more comfortable than the Gear Live’s plastic strap.

(The very bottom of the display is cut off to leave room for an ambient-light sensor. That was not inevitable; LG’s upcoming Android Wear-equipped G Watch R sports a completely circular screen.)

The 360’s backlit LCD — not a more energy-efficient OLED — gets tricky to view in sunlight, but indoors it can function as a short-range flashlight. My toddler delighted in being able to “turn the light on on the watch” with a tap of her fingers.

Its diameter barely exceeds the diagonal spans of the Gear Live and G Watch screens, but that translates into a surface about 50 percent larger. That’s not always good: When Android Wear notified me of somebody’s birthday by splashing their Google+ profile picture on the screen, I worried that people across a subway car would recognize the person.

The 360 also feels thicker than .45 inches, probably because its circumference isn’t broken up by the chamfered edges, curves and multiple dials around the even thicker non-smart watches that top Amazon’s “new and popular” list. Much of that volume is taken up the 360’s 320 milliamp-hour battery. 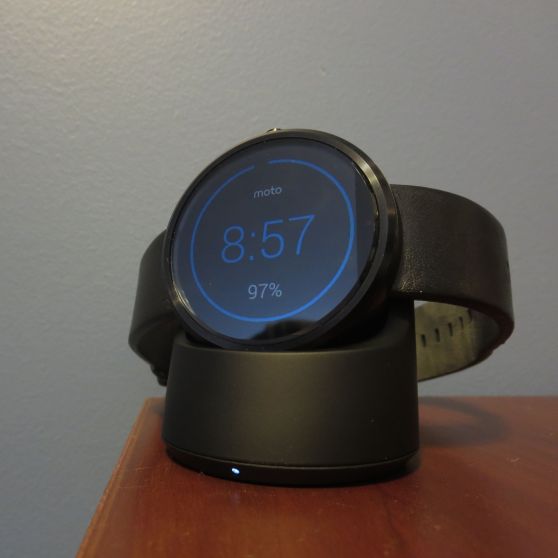 Motorola claims an “all day” battery life for this thing, and that is possible with its default screen setting. But that default — disabling the “ambient screen” option that keeps the screen on but dimmed for longer — leaves the 360 an inert disc of glass most of the time.

The screen is supposed to illuminate when you get a notification or you flick your wrist, but that gesture failed to wake the watch often enough to leave this setting somewhere between irritating and unusable.

With ambient screen on, however, battery life shriveled. After 12 hours of use, it had 23 percent of a charge left on one day, 27 percent on another. It didn’t make it past 17 hours either day.

Recharging the 360 happens to be a dramatically more awkward proposition than topping off a phone’s battery. You can’t grab any random micro-USB cable. You also need its inductive charger. And this charger isn’t a compact plastic clip like the Gear Live’s; it’s a large lump that cradles the watch and which you can’t hope to stash in your pants pocket.

Nothing on the watch or the charger indicates this, but the 360 sort-of supports the Qi wireless-charging standard … in the sense that a Motorola tech-support note says you can try using a different Qi charger but then warns that it probably won’t work. And at least one outside report suggests that caution is warranted.

This watch leaves me torn. I increasingly appreciate being able to see a new text message or e-mail without having to grab my phone (provided that I can refrain from checking a smartwatch for new notifications as often as I glance at my phone). But under no circumstances should a watch’s battery life make a phone’s battery life look good, and the 360 does exactly that.